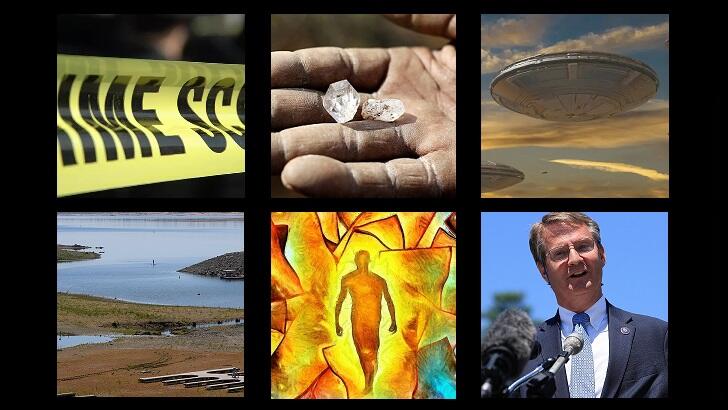 The Son of Sam murders, the disappearance of Jimmy Hoffa, and UFO disclosure were among the fascinating topics explored this past week on Coast to Coast AM. And, here at the C2C website, we told you about an enormous diamond unearthed in Botswana, the potential discovery of a long-lost downed plane in California, and a United States Congressman who argues that UFOs are probably extraterrestrial. Check out our round-up of highlights from the past week ... In Coast You Missed It.

The 1975 disappearance of Jimmy Hoffa is a classic American mystery that has left researchers guessing for decades. On Tuesday night's program, journalist Dan E. Moldea detailed his investigation into the puzzling case. He revealed that the former Teamsters Union president was likely murdered by organized crime figures in Detroit and his body was probably then transported to a toxic waste dump in New Jersey. Moldea also argued that Hoffa was connected to the JFK assassination by way of an alliance with the New Orleans mafia.

In a testament to how the public perception of UFOs has changed in recent years, a United States Congressman mused this week that, if these mysterious craft are real, then they likely come from "out of this galaxy." Representative Tim Burchett of Tennessee made the surprising endorsement of the extraterrestrial hypothesis after dismissing the possibility that UAPs are Russian in nature, which he called a "ridiculous" idea. The Congressman went on to assert that the Roswell crash was covered up by the government and lamented that the 'powers that be' refuse to reveal the truth to the American people.

Could infamous serial killer David Berkowitz have had accomplices who were part of a Satanic cult? This intriguing and unsettling question was explored on Saturday night's program by Joshua Zeman, director of the recent Netflix documentary series "Sons of Sam." He detailed how the program presents the research of journalist Maury Terry, who argued that the 1977 killing spree in New York City had multiple participants and, the reporter believed, they were a part of a complex web of Satanic groups spread throughout the United States.

This past week saw a pair of unexpected stories centered around, of all things, diamonds. First, in South Africa, a veritable 'diamond rush' erupted in a village where some mysterious crystal-like stones were discovered. Convinced that the unearthed objects are diamonds, thousands of treasure hunters descended upon the community in the hopes of recovering some of the curious rocks. Meanwhile, in Botswana, a mining company unearthed a jaw-dropping 1,098-carat diamond that is believed to be the third-largest such gem ever discovered.

The prospect that we are on the cusp of UFO disclosure was a hot topic of conversation on C2C this past week with two separate guests offering dramatically different opinions on such a scenario. First, on Sunday night's program, screenwriter Bryce Zabel expressed excitement and optimism about current events surrounding UAPs and the possibility that we may soon learn that 'we are not alone.' However, on Monday night's show, author L.A. Marzulli postulated that the mysterious forces behind UFOs are actually demons working at the behest of the Antichrist looking to usher in 'End Times.'

A longstanding California mystery may nearly be solved as it was revealed this week that a downed aircraft that had been missing for decades might have finally been found. The plane in question vanished following a mid-air incident over Folsom Dam near Sacramento on New Year's Day back in 1965. Despite multiple searches over the years, the airliner was never located. However, an underwater surveying company recently tested some new equipment at the adjoining Folsom Lake and were stunned when they spotted a sonar return showing an airplane, believed to be from the 1965 crash, in the water.