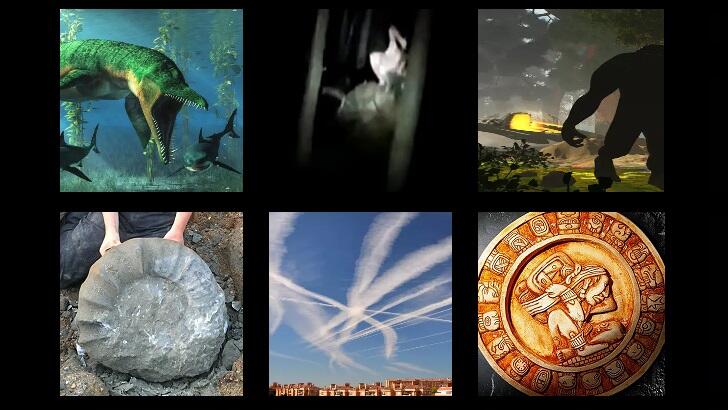 Sea monsters, Bigfoot, and chemtrails were among the riveting realms explored this past week on Coast to Coast AM. And, here at the C2C website, we told you about a farmer's encounter with a bizarre mystery creature in Poland, a massive fossil unearthed in England, and a Doomsday theory which suggests that the Mayan Calendar will actually end on Sunday. Check out our round-up of highlights from the past week ... In Coast You Missed It.

Could nefarious forces be spraying chemicals in the sky in order to manipulate both the weather and people on the ground? This troubling question was explored on Monday night's program as Peter A. Kirby detailed his research into chemtrails and geoengineering. He posited that this sinister practice arose from the machinations of the world elite and has been perfected in recent years to the point that, he believes, every airliner in the sky today is equipped to clandestinely disperse these chemical concoctions. Kirby also revealed that a scientific analysis of chemtrails revealed that they contain fly-ash, aluminum, and strontium, among other ingredients.

A pair of fabulous fossil finds made news this past week, beginning with the discovery of an enormous shell from an ancient sea creature known as an ammonite. The amazing object, which was unearthed by a pair of college students in England, measured two feet in diameter and weighed a hefty 211 pounds. Meanwhile, it was announced by a team of researchers that a curious fossil discovered in Antarctica and resembling a deflated football had finally been identified after nearly a decade of stumping scientists. Dubbed 'The Thing,' the puzzling find was a deflated egg left behind by a massive marine reptile.

Since time immemorial, the idea of mysterious sea monsters lurking beneath the waves has fascinated mankind and spawned all manner of myths and legends. On Saturday night's program, author Max Hawthorne discussed the real-life creatures that inspired these tales as well as curious sightings of underwater beasts seemingly still to be discovered. He shared one intriguing incident in which a massive marine animal appeared next to a Carnival Cruise Line that left tourists and employees baffled. Hawthorne also recalled a 1969 incident wherein a man filmed an enormous turtle that appeared to measure 38 feet long!

Given the strangeness of this year, many have understandably wondered if perhaps we're living in End Times and, as if on cue, a new doomsday prediction popped up online this week to fuel those fears. Despite having something of a dubious background, a scientist's theory that the infamous Mayan Calendar end date was miscalculated and, in fact, actually occurs this coming Sunday, June 20th, captured the imagination of people online and spawned headlines around the world. Fortunately, unlike the first time around, we'll only have to wait a few days to find out if the prediction is correct.

Bigfoot took center stage on Thursday night's program as Kenney Irish and Gary Robusto talked about their research into North America's iconic cryptid. They reflected on how the mysterious creature can be found in Native American lore and it is often described as human in nature. The also delved into accounts of UFOs and Bigfoot being seen in the same area and speculated that this may be due to higher Earth energy in those locations. The duo also discussed the Sasquatch hotbed that is Whitehall, New York, where the creature has been seen numerous times over the years and, in one case, made repeated visits to the home of a woman living there.

Two fantastic pieces of footage surfaced online this week showing some serious high strangeness. From a forest in Poland emerged a video in which a farmer was investigating bizarre animal shrieks and wound up stumbling upon a truly weird mystery creature that caused him to flee in terror. He later claimed that such oddities are known locally as "crawlers" and they normally reside underground. On a less unsettling note, a pet camera stationed in a woman's home may have captured the ghost of her late cat Blackjack materializing on her couch. The bewildered homeowner insists that the footage was not manipulated in any way and theorized that perhaps the spirit of her feline friend was paying her a visit.