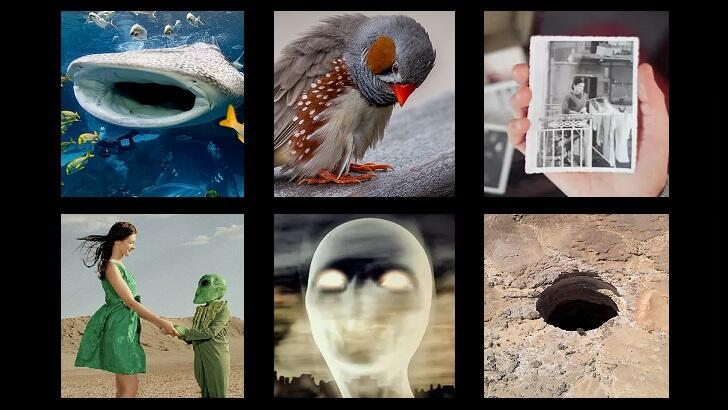 Shared past lives, demonic possession, and sea monsters were among the fascinating realms explored this past week on Coast to Coast AM. And, here at the C2C website, we told you about a haunting hole in Yemen, a mysterious disease killing birds by the hundreds, and a woman who fell in love with an alien that abducted her. Check out our round-up of highlights from the past week ... In Coast You Missed It.

Demonic possessions took center stage on Wednesday night's program as psychic Kimberly McGeorge talked about how she uses her gift to help those who have become the target of sinister forces. She explained that such situations can be caused by a variety of factors including an ancestral curse, an evil spirit, or a traumatic incident. Recounted her work with possessed individuals, McGeorge revealed that she frequently sees "little furry creatures" attached to an inflicted individual's shoulder or hair and indicated that these are parasitic entities. Chillingly, she recalled one particular incident in which her client had an unsettling eight of the creepy critters lingering around them.

This past week brought news of a rather worrisome development in the form of a mysterious sickness that is believed to be responsible for killing hundreds of birds across several states. The unfortunate creatures stricken with the ailment are said to experience blindness due to a discharge from their eyes as well as neurological issues that render them unable to fly and, in some cases, stand on their feet. Initially noticed in Washington D.C., Virginia, Maryland, and West Virginia, the disease has now spread to Ohio, Indiana, and Kentucky. While authorities scramble to figure out what might be causing the sickness, they are advising homeowners to clean their bird feeder and birdbaths to 'stop the spread,' since getting the animals to stay six feet apart much less wear a mask seems like a fool's errand.

An intriguing theory surrounding reincarnation is that people share past lives as part of a 'soul group' that returns to the Earthly realm in various permutations over time. On Tuesday night's program, longtime friends Dr. David Bettenhausen and Carla Bogni-Kidd discussed how, based on spontaneous memories and past life regression sessions, they believe that they have had a staggering 29 past lives together. The duo detailed some of these previous relationships, including one in which they were siblings and another wherein Bogni-Kidd was Bettenhausen's mother. They theorized that each lifetime allows for an individual soul to experience different roles within society, presumably as part of a long-term learning process stretching out over centuries.

In a testament to how there are still places on the planet that prove to be quite puzzling to scientists, this past week saw a spotlight shine upon an eerie chasm in Yemen, dubbed the 'Well from Hell,' which remains a mystery to experts despite being in existence for thousands of years. The odd pit, which looks positively ominous in contrast to the desert around it, measures approximately 98 feet in diameter. However, its depth is unknown as, due to perilous conditions inside the hole, officials in the country have never been able to descend deep enough to get a measurement. As one might imagine, all manner of legends have become attached to the chasm over the years with one particularly spooky tale being that it is a prison for demonic entities.

While it may seem as if tales of menacing sea monsters are a relic of the distant past when sailors swapped colorful stories on high seas, there are actually accounts of such creatures in modern times. On Saturday night's program, author Max Hawthorne shared some of these contemporary incidents, such as a 2013 case in which a fisherman in Florida was stunned to see a 30-foot-long tentacle emerge from the water and snake its way over to his boat. The awestruck witness later described seeing the body of the beast, which was an octopus, and marveled that it measured another 80 to 90 feet in length. Hawthorne also recalled a 1969 case in which a swimmer encountered a massive turtle estimated to have been 38 feet long.

Easily the weirdest story of the week came by way of England, where a woman revealed that she has fallen in love with an extraterrestrial that abducted her. Actress Abbie Bela says that her odd romance began when she lamented about her love life online and jokingly wondered if she would have better luck dating aliens. A few days later, she claims, a UFO appeared in her backyard and beamed her aboard the ship. It was there that Bela believes she met her cosmic soulmate in the form of an ET that apparently shared similar feelings. Alas, fearing that she could not come back to Earth, the actress turned down the chance to remain on the ship, though she now keeps an overnight bag packed and ready by her bed in the event that her would-be interstellar paramour returns.