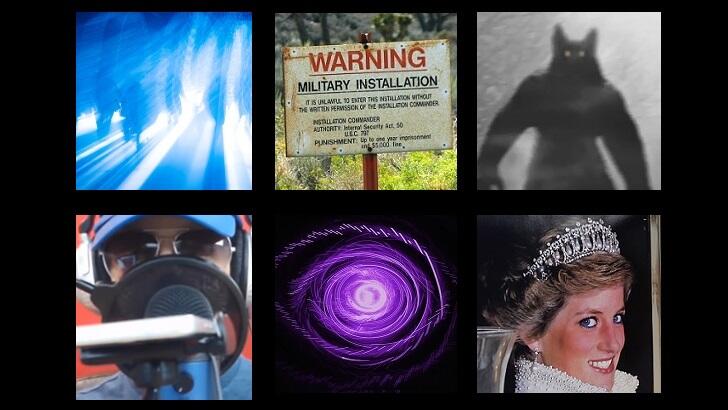 Helping 'stuck souls' cross over to the other side, encounters with monsters, and using law enforcement techniques to investigate the paranormal were among the fascinating topics explored this past week on Coast to Coast AM. And, here at the C2C website, we told you about how the 'Storm Area 51' concept has become a bonafide viral sensation, a teenager in Minnesota who revealed that he faked being a time traveler online, and a four-year-old boy in Scotland who just may be the reincarnation of Princess Diana. Check out our round-up of highlights from the past week ... In Coast You Missed It.

Modern-day reports of monsters that sound like creatures from ancient lore was the topic of discussion on Monday night's program as Linda Godfrey detailed her research into this truly strange phenomenon. Having spoken to numerous individuals who claim to have had such encounters, she expressed skepticism that this was some kind of mass hallucination. Intriguingly, she noted that these entities seem to be supernatural, yet also exhibit characteristics which suggest that, at least temporarily, they are physical beings.

Last week's wild story about UFO enthusiasts allegedly planning to storm Area 51 turned into a full-blown phenomenon this past week as the concept went viral worldwide and the number of people purportedly joining in on the siege increased to well over a million. The frenzy surrounding the foolhardy idea grew to the point that the U.S. Air Force had to issue a statement warning against such an endeavor. Meanwhile, copycat events sprung up for sites all over the globe, including the Bermuda Triangle, and memes poking fun at the concept swept across the internet.

A fascinating and unique realm of the afterlife was explored on Tuesday night's program as Father Nathan G. Castle discussed his work helping to facilitate the process of crossing over for individuals who have had their souls 'stuck' in our realm. He attributed this strange circumstance to a person having an abrupt or unexpected death which causes some kind of disconnect in their spiritual journey. Over the last 20 years, Castle has managed to help at least 250 finish their journey to the other side.

In a disappointing but not exactly shocking turn of events, a teenager from Minnesota revealed this week that he was an actor in several wildly popular YouTube videos in which he hoaxed being a 'whistleblowing time traveler' from the future. Denis Bel explained that the stress of portraying the character 'Noah from 2030' and being seen by millions of people online eventually grew too stressful as his tale became increasingly convoluted. "At first it was fun to play Noah, because it was just a big joke," Bel said, "but eventually I stopped laughing."

Offering a different perspective on paranormal investigation, law enforcement officer Greg Lawson appeared on Saturday night's program to talk about how he applies his police training to investigate haunting cases. The proverbial 'paranormal detective' noted that haunted locations should be treated like crime scenes in the sense that one must enter with an open mind and rule out all potential possibilities rather than immediately assuming that there's a ghost afoot.

One of the weirder tales we've seen in quite some time emerged this past week out of Australia as a television personality there revealed that his four-year-old son inexplicably seems to believe that he was Princess Diana in a past life. David Campbell says that the youngster has made several eerie statements over the last two years which indicated knowledge of Diana's life that he simply should not know, including remarkably precise details about a residence in Scotland which she was known to love.