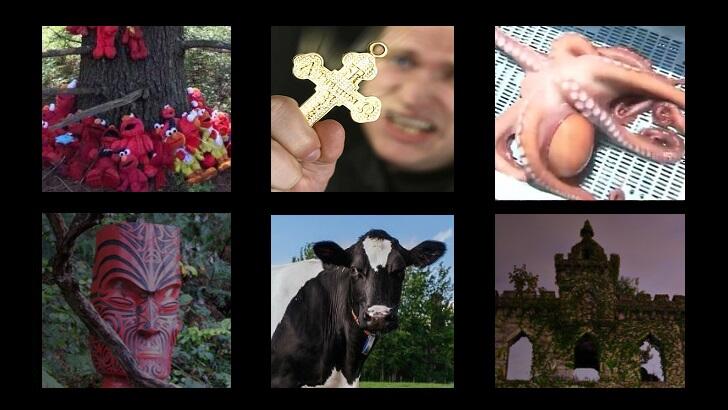 This past week on Coast to Coast AM and here at the C2C website, we featured an eclectic mix of strange and unusual topics and stories, including a 'time warp' located outside of Las Vegas, the origins of the Jersey Devil, an unsettling Elmo tree discovered in Massachusetts, and even a case involving a talking cow! Check out our collection of highlights from the week ... In Coast You Missed It.

The infamous tale of the Jersey Devil is one of the most fascinating stories in American folklore and on Saturday night's edition of the program, C2C listeners learned about the 'secret history' of the creature. Author Brian Regal discussed his work which traced the origins of the story to 17th century West Jersey and a disaffected former Quaker who had been branded the 'Devil's Harbinger.' Over time, Regal explained, the tale evolved from being about a man in league with the devil to a modern myth involving a sinister demonic creature.

With the World Cup fever gripping much of the globe over the last few weeks, we've seen more than a few strange stories connected to the big tournament, including a pair this past week which were somewhat troubling. It all began when a 'psychic' octopus in Japan was killed and sold for seafood despite having a perfect record for prognosticating World Cup outcomes. Then a beloved 'clairvoyant' cat in China passed away after predicting the correct results of six straight games, leaving us to wonder if, perhaps, their demise was caused by some kind of World Cup curse.

Could there be some kind of 'time warp' located in the Nevada desert? On Wednesday night's program paranormal investigator Joshua Warren detailed how his research seems to have uncovered a spot twenty miles north of Las Vegas where time is slowed down by twenty microseconds. The remarkable find was made all the more intriguing when Warren later learned that the area is also a UFO hot spot, which he suggested could allow for an eventual map of prime locations for researchers to look for anomalous aerial phenomena should more 'time warps' be found.

A nearly-equally odd discovery as the one made by Warren occurred this week when a hiker in Massachusetts happened upon a scene that had us scratching our heads: an Elmo tree! The doll-covered nightmare fuel was spotted in the Myles Standish State Forest by a woman who shared photos of the unnerving sight on social media. As of now, the origin and purpose of the 'monument' is a mystery, but some suspect it was created to give hikers a scare. Should that be the case, it has likely been a rousing success.

In a truly chilling edition of the program, psychiatrist Dr. Richard Gallagher detailed his work as an exorcism consultant on Thursday night's show. Revealing that he has seen nearly 100 cases of demonic possession, Gallagher recalled instances where those afflicted spoke in foreign languages that they did not know, displayed superhuman strength, and inexplicably knew eerie information like details about how his mother had died. He also explained how these cases can last for years and require dozens of exorcisms until the possessed has come to an end, if it even does.

And, finally, a village chief in Zimbabwe had hands full with two different bizarre cases that wound up making headlines this past week after they fell into his jurisdiction. First, he was called upon to settle the matter of a 'cursed' jacket which has been blamed for the death of a whopping twenty people over the last two decades. Meanwhile, Chief Zimunya is also trying to get to the bottom of a case surrounding, of all things, a talking cow that has been tormenting a family through constant criticism of their care. How and why these two weird stories somehow occurred in the same community is anyone's guess, but we can't wait to see what might happen there next.