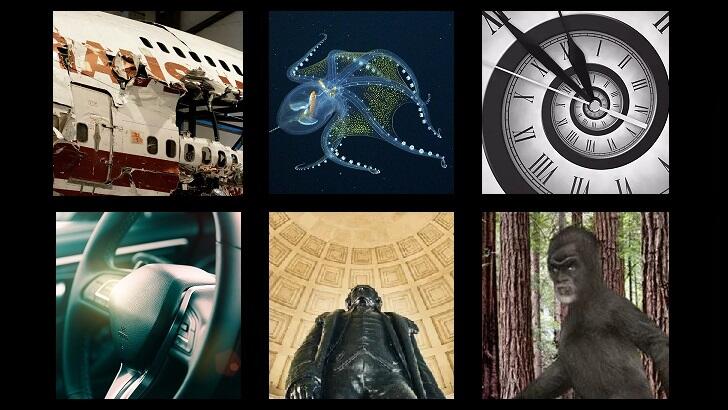 Time travel, channeled conversations with Thomas Jefferson, and the curious crash of TWA Flight 800 were among the fascinating realms explored this past week on Coast to Coast AM. And, here at the C2C website, we told you about a glass octopus spotted in the Pacific, a peculiar video possibly showing Bigfoot in Michigan, and a driver who crashed her car after deciding to "let God take the wheel." Check out our round-up of highlights from the past week ... In Coast You Missed It.

If we could ask them, what might the Founding Fathers of America say about the current state of our country today? This intriguing question was explored on Sunday night's program as author Suzanne Munson detailed her channeled conversations with Thomas Jefferson. Although the third president passed away nearly two centuries ago, she indicated that his spirit is not frozen in time and that he can actually observe present-day events. To that end, Munson revealed that Jefferson is dismayed at what our government has become in contrast to what the Founding Fathers envisioned when they formed the nation.

This past week saw the emergence of a particularly intriguing piece of footage purportedly showing Bigfoot crossing a river in Michigan. Said to have been filmed by a kayaker visiting the state's Cass River, the video features what appears to be a bipedal creature of some kind slowly making its way across the water while seemingly holding something in its arms. Some have speculated that it is a Sasquatch carrying a juvenile version of the creature or perhaps a deer, while more skeptical observers argue that the 'Bigfoot' is either a person hunting along the river or a hoax pulled off by some dedicated pranksters.

A staple of Hollywood fare and the subject of considerable speculation from scientists over the years, time travel took center stage on Wednesday night's program as author Jason Offutt talked about the tantalizing concept. While the idea may seem to be firmly rooted in the world of fiction, he noted that it has been treated as a genuine possibility by serious researchers over the years. During his appearance, Offutt discussed famous accounts of purported time travelers, like 'Mad Man' Marcum and John Titor, as well as a wild account of a mysterious experiment wherein scientists were said to have opened a door to another world and never returned.

The wonders of nature were on full display this past week in a pair of stories involving some truly remarkable creatures. First, in Bangladesh, a dwarf cow became something of a sensation after photos of the tiny creature went viral on social media in the country. Thousands of people descended upon the diminutive animal's farm in the hopes of having their picture taken with the 20-inch-tall cow which is believed to be the world's smallest bovine. Meanwhile, in a remote part of the Pacific Ocean, scientists aboard a research vessel managed to catch a rare glimpse of a breathtaking glass octopus that sports a nearly transparent body.

This coming weekend marks the 25th anniversary of the mysterious crash of TWA Flight 800 off the coast of Long Island and, on Thursday night's program, writer and producer Jack Cashill shared his research into the infamous event. He argued that the official explanation for the disaster, that there was an accidental explosion on board, is actually a cover story for what he believes really occurred, which is that the plane was accidentally downed by way of friendly fire from a nearby Navy ship that mistook it for a terrorist attack. Cashill theorized that the true nature of the crash was kept hidden from the public because the Navy would not admit to what had happened and Bill Clinton did not want to hurt his reelection chances.

Easily the most bizarre story of the week came by way of Ohio where a driver was arrested following a car crash that occurred after she "let God take the wheel." The unnamed motorist explained to police that, in response to a series of difficulties that had befallen her in recent weeks, she embarked on an ill-advised test of faith by accelerating her car to an unsettling 100 mph and literally letting divine intervention decide what happened next. The vehicle subsequently wound up running through a red light, clipping a car, and careening out of control into a house. Fortunately, no one was hurt during the misadventure, which is rather miraculous considering the dangerous nature of her driving.