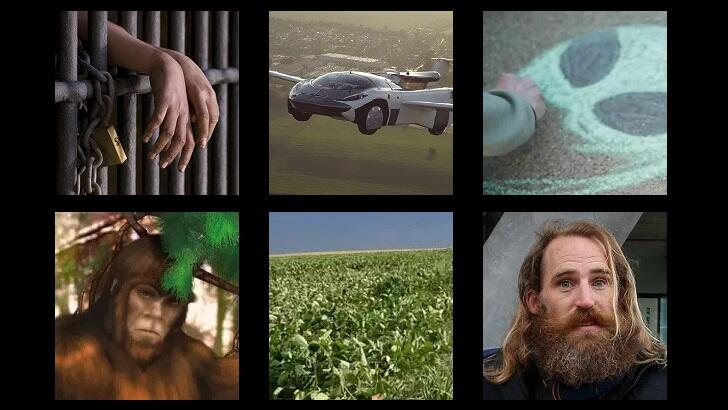 Children's ET encounters, the wrongly convicted, and weedkiller dangers were among the fascinating realms explored this past week on Coast to Coast AM. And, here at the C2C website, we told you about a pair of potential Bigfoot sightings, a flying car's successful test flight, and an appearance by the 'prime creator of Earth' in Australia. Check out our round-up of highlights from the past week ... In Coast You Missed It.

A rarely explored aspect of the alien abduction phenomenon centers around the accounts of children who say that they have also been visited by these mysterious beings. On Monday night's show, hypnotherapist Barbara Lamb discussed her work with kids who recall such experiences and she argued that they appear to be genuine encounters with extraterrestrials rather than, as their parents might think, merely a figment of their imagination. She explained that many of the youngsters report seeing a ball of light or sparkles fill their bedroom before a diminutive being emerges from the illumination. Remarkably, Lamb said that these children often recount being taken aboard a spacecraft and, in some cases, being taught psychic skills like telepathy or levitation.

This past week saw a pair of stories featuring possible Bigfoot sightings, beginning with a compelling account from a motorist in upstate New York, who took to social media to report seeing a hairy bipedal creature dash in front of his car at incredible speed. The account was particularly interesting as the witness begrudgingly shared it online "at the risk of ridicule" and actually wound up hearing from several friends who had similar experiences seeing a strange bipedal creature in the area. Meanwhile, a peculiar video purportedly showing Sasquatch lurking alongside an off-road vehicle went viral on TikTok with some expressing amazement at the scene and others scoffing at how it appeared to be fake.

Thanks to advances in DNA technology and the enormous popularity of the true crime genre, there have been several instances in recent years wherein it has been shown that an innocent individual was wrongly convinced of a heinous crime. On Saturday night's program, podcaster Bob Ruff talked about his work investigating such cases and the challenges in getting an incorrect verdict overturned. To that end, the detailed the story of Ed Ates, who was sentenced to 99 years in prison for a murder he did not commit. After serving 20 years, he was released on parole when it was shown that DNA evidence and fingerprints left at the crime scene indicated that he was not the killer.

Those who have longed for the day in which a flying car becomes a reality received some welcome news this week when a Slovakian company working on just such a vehicle managed to successfully complete an inter-city test flight with their prototype. The remarkable accomplishment saw the 'AirCar' depart from the city of Nitra, smoothly fly approximately 45 miles over the course of 35 minutes, and land safely at an airport in the Slovakian capital of Bratislava. Demonstrating the feasibility of the vehicle, it transitioned from an aircraft into a car in a matter of minutes upon landing and then triumphantly cruised into the center of the city.

Could the world's most popular weedkiller, Roundup, be responsible for a rise in debilitating diseases? This troubling question was explored by MIT senior research scientist Stephanie Seneff on Thursday night's program. She recalled first becoming concerned about glyphosate, the herbicide used in the weedkiller, when she noticed that the autism rate in the general population had skyrocketed, which she suspected had an environmental cause. Subsequent studies of the chemical found that it causes disarray in the essential minerals of both plants and, chillingly, people who inadvertently ingest it. Since Roundup is widely used throughout the United States, Seneff believes, it has likely contributed to all manner of health issues in individuals, including cancer and liver disease.

By far the weirdest story of the week unfolded in Australia where a man claiming to be the "prime creator of Earth" disrupted a press conference to air his grievances with the government. The bizarre incident occurred as a police commissioner was addressing the media about a newly enacted coronavirus-related lockdown. Suddenly, a bearded stranger burst through the crowd of reporters and demanded to know if the official had received his cease and desist order. Confusion over the curious interloper was compounded when he subsequently claimed to be God, which understandably led to the man being ejected from the event by police.