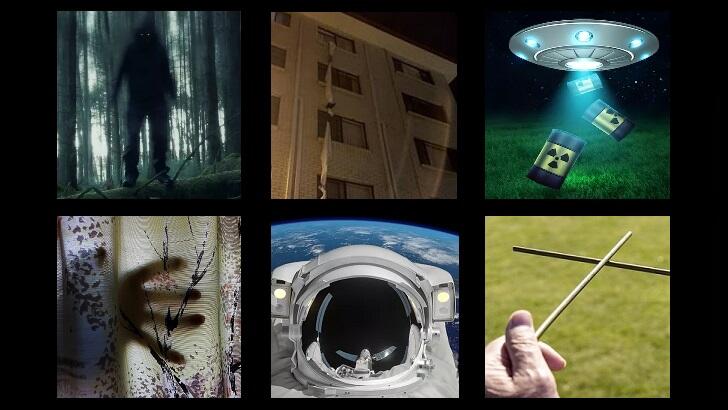 UFOs and nuclear sites, spooky stories, and billionaires in space were among the fascinating topics explored this past week on Coast to Coast AM. And, here at the C2C website, we told you about a pair of potential hauntings, a resurgence in dowsing, and an Australian man who fled a coronavirus quarantine using a rope made of bed sheets. Check out our round-up of highlights from the past week ... In Coast You Missed It.

One of the more worrisome aspects of the UFO phenomenon centers around accounts of mysterious flying objects making incursions into the airspace around nuclear weapons sites. On Sunday night's program, Robert Hastings discussed his exhaustive research into cases in which this curious behavior was displayed. More than merely observing, he said, in some instances the UFOs have been known to shut down or even activate such missile systems. While the origins of the craft and their purpose continue to mystify, Hastings mused that there is no doubt that such 'visits' constitute a national security concern.

This past week saw two troubling tales of haunted homes, beginning with a case in England wherein a woman says that she was scratched by some kind of sinister spirit that has taken up residence in her house. The suspected spectral attack was the final straw for Leah Lewis, who had experienced unsettling paranormal activity in the home over the last several months and ultimately decided to enlist a psychic medium to cleanse the home of the angry apparition. Meanwhile, in France, a family claiming to be plagued by a similarly unhappy ghost revealed that they have been forced to sleep on their balcony in order to escape their proverbial roommate from hell.

With summer in full bloom, 'tis the season for spooky stories told around the campfire and, on Saturday night's program, author Jim Harold stopped by Coast to Coast to share a round of truly chilling tales. He recounted one eerie account wherein a husband and wife were talking about the concept of reptilian aliens as they had recently heard discussed on C2C. In the midst of their exchange, the couple's toddler son interjected with a spooky "people not ready yet." During his appearance, Harold also talked about a suspected guardian angel encounter following an accident in Texas and a dying child who made a rather miraculous discovery on a dinosaur dig.

In a testament to the idea that everything old eventually becomes new again, this past week saw the ancient art of dowsing have a moment in the sun by way of a sudden increase in demand for so-called 'water witches' in drought-stricken California. While mainstream science has long dismissed the purported practice of divination which utilizes rods or other similar instruments to locate precious objects, those who have mastered the craft say that it genuinely works. And it would appear that there is no shortage of ranchers and farmers who either also believe it or are willing to give dowsing a shot in light of the scorching conditions as California's water witches say that business has never been better.

Like something out of a dystopian science fiction film, the headlines over the past few weeks have been dominated by billionaires launching themselves into space. On Tuesday night's program, science historian Robert Zimmerman shared his thoughts on the recent journeys of Richard Branson and Jeff Bezos as well as what the future might hold for private space ventures. To that end, he indicated that the proverbial proof of concept displayed by the respective billionaires marks the start of what will be a burgeoning space tourism industry. Zimmerman also mused about a return to the moon and the latest research happening on Mars.

A scene from a cartoon came to life in Australia this week when a man ordered to quarantine in a hotel due to the pandemic instead decided to make a break for it by way of a rope made of bed sheets. The odd incident came about when a traveler arrived in the state of Western Australia without the necessary travel exemptions to get around the country's strict coronavirus lockdown. As such, he was remanded to a hotel for the night, but the stay didn't last long. Much to the consternation of the authorities, the man managed to fashion a rope out of bed sheets and shimmied down four stories of the building to the street below, where he subsequently fled on foot. Caught by the cops the next day, he's now in a different kind of quarantine: jail.