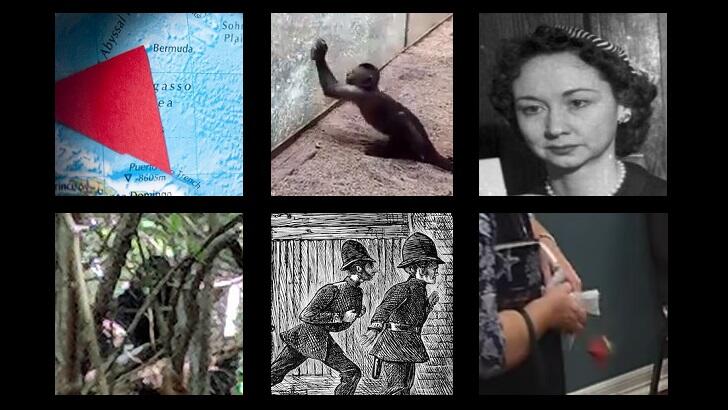 The infamous Bermuda Triangle, the mysterious death of Dorothy Kilgallen, and New York City's first gangster were among the fascinating topics explored this past week on Coast to Coast AM. And, here at the C2C website, we told you about a pair of potential Bigfoot sightings, an ornery rhino facing off with an unfortunate zookeeper stuck inside a car, and a 'visionary' in Texas who had her story go up in smoke thanks to some unearthed security camera footage. Check out our round-up of highlights from the past week ... In Coast You Missed It.

The strange death of reporter and TV star Dorothy Kilgallen in 1965 has long fascinated conspiracy theorists, who believe that her demise was somehow connected to the JFK assassination. Author Mark Shaw explored this possibility on Tuesday night's program and detailed how his research led him to conclude that Kilgallen was probably murdered and her death staged to look like a suicide. Shaw also revealed that he now hopes to have Kilgallen's body exhumed to potential find DNA evidence linking the person he suspects in the crime.

Our old friend Bigfoot left a big impression on the news this past week by way of three stories featuring the famed Sasquatch. First, a couple driving along a dark road in the mountains of Utah captured footage of a strange anomaly on the side of the road that many believe to be the elusive crypid. Meanwhile, a researcher in North Carolina shared evidence of what he suspects was his own encounter with Bigfoot earlier this month. And, on a different note, a landscaping company enlisted the help of police after their six-foot-tall Sasquatch statue was stolen in the dead of night.

One of the most iconic paranormal mysteries in the pantheon of high strangeness is that of the multitude of baffling disappearances of ships and planes while passing through the infamous Bermuda Triangle. On Wednesday night's program, author Mike Bara discussed the perplexing region in the Atlantic Ocean and some of the classic cases which led to the area's ominous reputation as a place where travelers may vanish without a trace. He detailed the history of the Bermuda Triangle and opined on some of the theories as to why there are so many cases of inexplicable disappearances.

This past week saw a pair of videos featuring animals misbehaving in decidedly different ways pop up in the news. There was a Capuchin monkey in a Chinese zoo who was caught dramatically smashing a glass wall in its enclosure with a sharpened rock. In contrast to that diminutive creature, a monstrous rhino at a safari park in Germany was filmed charging at and flipping a car that contained an unfortunate zookeeper who was violently tossed inside the vehicle. Fortunately, the shaken worker emerged from the battered car with only a concussion and a few bruises.

Coast to Coast AM traveled back to the summer of 1860 in New York City on Saturday night's program as author Rich Cohen shared the riveting story of Albert Hicks, a ruthless criminal who captured the imagination of the nation in the months leading up to the Civil War. Cohen recounted how Hicks' modus operandi saw him getting work aboard ships and then inspiring mutinies so that he could overtake the vessel and steal any money contained on board. His reign of terror ultimately ended when he was captured following a nationwide manhunt and his subsequent trial turned into one of the first media sensations in America.

By far the most bizarre story of the week emanated from Texas, where an alleged visionary who claims to be communicating with the Virgin Mary was seemingly busted faking a miraculous event. After causing a stir in the local community in recent weeks with alleged revelations and messages from Heaven, the woman was filmed by a security camera at a religious center surreptitiously dropping a rose on the floor and then watching as astounded people plucked the flower from the ground after she told them that it was "a miraculous gift of the Virgin Mary." Suffice it to say, local Church officials were not amused and exposed the hoax by releasing the video as well a statement declaring her story to be a complete fabrication.

Animal welfare activist Carney Nasser discussed the illegal animal trade in the U.S. Michele McPhee detailed her research into a possbile FBI coverup in the case of the Boston Marathon Bombing.