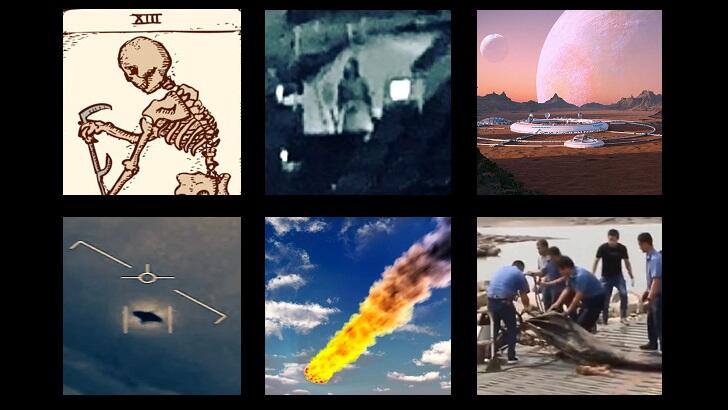 Remote viewing insights, the secret space program, and the power of Tarot were among the fascinating realms explored this past week on Coast to Coast AM. And, here at the C2C website, we told you about a pair of possible appearances by ghosts, some 'sea monsters' that weren't, and the latest Navy revelations concerning UFOs. Check out our round-up of highlights from the past week ... In Coast You Missed It.

One of the most iconic instruments in the world of the esoteric is the Tarot and, on Thursday night's program, psychologist Art Rosengarten explored how the cards can be used to increase intuition and spark creative breakthroughs. Contrary to the popular perception of the Tarot, he argued that they do not actually predict the future, but can be used to "read the present on a deep, deep level" by allowing users to overlay their own interpretations onto the cards and, in turn, get a better understanding of themselves.

As has been the case numerous times throughout the year, the UFO phenomenon made headlines around the world this week after the United States Navy said that the much-discussed viral videos that have been online for the last few years are genuine and show 'unidentified aerial phenomena' that they cannot identify. Indicative of the considerable optimism in UFO circles that we're on the cusp of being told 'the truth' about the phenomenon, a billboard popped up in Montana telling drivers that disclosure is underway and they best be prepared for it when it happens.

Longtime friend of the program remote viewer Ed Dames returned to C2C on Monday night with an update on the various cases he's been working on with this team of psychic researchers. He warned that the Apophis asteroid, which passes close by Earth in 2029, could set off a chain of events leading to a worldwide catastrophe. Dames also revealed remote viewings insights on crop circles, which he said are sometimes created by some kind of technology on Mars, and the Dyatlov Pass incident, which he said was caused by whatever force is behind the cattle mutilation phenomenon.

This past week was not a particularly good one for aquatic 'monsters' as a pair of possible creatures wound up being debunked. The more disappointing of the two took place in China where a mysterious 'animal' spotted in a river captured the imagination of people online, but was eventually shown to be a giant piece of rubber that had somehow gotten dumped in the water. Meanwhile, in Scotland, a much-discussed underwater video showing what appeared to be a giant 'Loch Ness Eel' turned out to be just a stick.

The long-discussed possibility that the 'powers that be' operate a secret space program has caught fire in paranormal circles over the last few years. On the Wednesday night edition of Coast, Dr. Michael Salla discussed his research into that realm and posited that fantastic technology that has been used by this program may soon be revealed to the public thanks to recently unveiled Navy patents. He also talked about the JFK assassination as well as the death of Marilyn Monroe and how those events could be connected to their knowledge of this clandestine technology.

Just in time for the start of spooky season, potential ghosts have begun making appearances in the news. First, an eerie photo taken at a haunted theater in Austin seems to show one of the site's resident spirits lingering in the mezzanine. And, over in England, a woman could not believe her eyes when the CCTV system at her home seemingly captured footage of a full-bodied apparition suddenly manifest out of thin air on the sidewalk of a street.