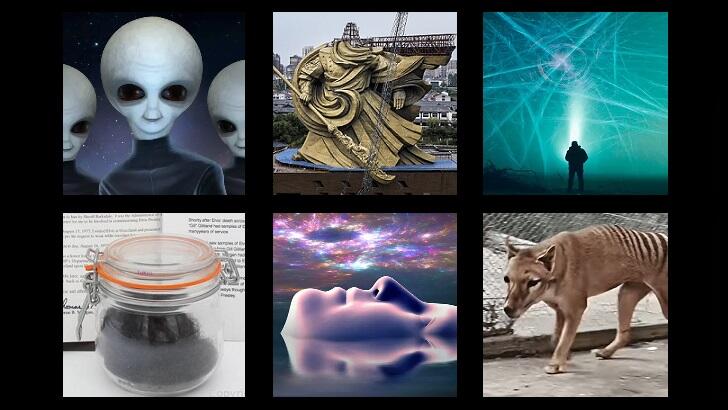 Alien implants, the power of dreams, and using night vision technology to spot UFOs were among the riveting realms explored this past week on Coast to Coast AM. And, here at the C2C website, we told you about a vivid new look at the Tasmanian Tiger, a massive statue being relocated in China, and a jar of Elvis' hair that fetched a huge sum at auction. Check out our round-up of highlights from the past week ... In Coast You Missed It.

A troubling tangential aspect of the alien abduction phenomenon centers around curious objects that some believe to be devices that are implanted into the bodies of those who are taken by extraterrestrials. On Monday night's program, chemist and abductee Steve Colbern detailed his research into these peculiar pieces of material, one of which was actually removed from his own foot. This potential implant, which he said was around the size of a grain of rice, contained 58 different elements and was similar in composition to nickel-iron meteorites. As to why ETs may be abducting humans, Colbern theorized that is part of a larger agenda aimed at altering our species so that we can someday be a part of the galactic community.

The last remaining Tasmanian Tiger in captivity sadly passed away 85 years ago this week and, in recognition of the event which has since become National Threatened Species Day in Australia, the country's Film and Sound Archive released a remastered and colorized film of the extinct creature that is simply breathtaking. Originally shot in 1933 by naturalist David Fleay at the Beaumaris Zoo, the 35mm negative of the footage was subjected to an UltraHigh Definition 4K scan and then subsequently colorized by a world-renowned expert in the process over the course of more than 200 hours. The end result of the ambitious project provides an incredible glimpse of the creature that is unlike anything seen before.

Dreams were a hot topic of conversation this past week on Coast to Coast AM by way of two fascinating editions of the program. First, on Tuesday night, psychotherapist Dr. Laurie Nadel talked about how there appears to be an increase in precognitive dreams brought about by stress related to the pandemic and the tumultuous times that we are currently experiencing. Following that, on Wednesday night's show, hypnotherapist Dr. Bruce Goldberg shared how a vast array of personal improvements can be derived from dreams, including spiritual growth, creativity, problem-solving, healing, and mastering psychic abilities.

A bizarre bit of bureaucracy out of China made news this past week as backlash over an enormous statue led to the country's national government ordering it to be relocated in a process that will wind up costing nearly as much as the piece itself. Located in the city of Jingzhou, the 190-foot-tall bronze statue of warrior-god Guan Yu has been the source of controversy since it was first built in 2016 for a whopping $26 million as it was seen as something of an eyesore to both residents and officials. In response to the furor, the Chinese government finally declared that the piece must be moved, leading to even more acrimony when it was determined that the state-mandated project will cost a staggering $23 million.

One of the more tantalizing developments within the realm of UFO spotting in recent years has been the utilization of more widely available night vision technology to possibly catch a glimpse of these mysterious objects. On Sunday night's program, engineer and author Wilbur Allen discussed his highly sensitive infrared camera set-up which also utilizes an inverted telescope that allows him to see fantastic aerial objects and anomalies that would otherwise be invisible to the naked eye. These objects, he said, come in a variety of shapes and sizes with some resembling microbial life and others appearing to possibly be spatial portals.

By far the strangest story of the week centered around Elvis Presley, specifically a jar of music icon's hair which sold for a jaw-dropping $72,500 at an auction. Collected by his personal barber, Homer Gilleland, as he traveled the world tending to The King's iconic pompadour, the item was part of a huge sale of similarly unique memorabilia that was held over the weekend. Described as the "most well-documented collection of Elvis' hair in the world," the weird object came with a slew of paperwork confirming its origins including testimonials from experts in both collectibles and, oddly enough, human hair. Perhaps the most puzzling question to arise from the sale is not who would buy a jar of Elvis' hair, but what they plan to do with it now that they own it.