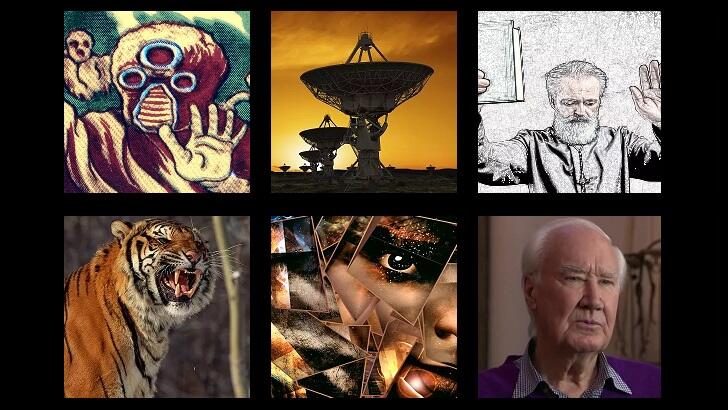 The legendary Kelly Goblin case of UFO lore, exorcisms, and shapeshifters were among the riveting topics explored this past week on Coast to Coast AM. And, here at the C2C website, we told you about a massive search for signs of alien life which came up short, a tiger spotted roaming the streets of Knoxville, and the passing of the man behind the famed Fenn Treasure. Check out our round-up of highlights from the past week ... In Coast You Missed It.

Chilling exorcism cases from across cultures and religions was the topic of conversation on Monday night's program as Joseph P. Laycock detailed his extensive research into the ancient practice of thwarting demonic possession. He explained that the perceived reasons why someone might run afoul of sinister forces varies by belief system as some groups suspect that very religious people are prone to possession while others argue that dabbling in the occult is the cause. He also shared several fascinating exorcism stories, including one unsettling account from 1634 in which an entire convent of nuns in France was said to be possessed by demons.

The search for extraterrestrial intelligence had something of a setback this week when it was announced that a massive survey of 10 million stars found no signs of alien life. The project, which was the largest of its kind, looked for radio emissions in the vicinity of the Vela constellation with the hope that somewhere in that patch of space would be a 'technosignature' which scientists suspect could have originated from an advanced species. UFO enthusiasts and alien aficionados need not despair as one of the astronomers behind the project likened it to searching for something in the ocean, but only examining a sample size the equivalent of a swimming pool, meaning that there's still quite of a lot of space where ETs may be hiding.

A famous UFO event from 1955 in which a family in Kentucky claimed to have encountered goblin-like beings that landed in a craft on their property was recounted in riveting detail on Saturday night's program by Geraldine Sutton Stith, who is the granddaughter of one of the principal witnesses in the case. She recalled how the family, which consisted of 11 people at the home during the incident, first saw a bright light in the sky and then their house was besieged by three-foot-tall entities which they were forced to fight off. Stith also reflected on the police response to their ordeal and the case's place in UFO lore.

This past week we bid farewell to a figure who spawned all manner of strange and unusual stories over the last few years, as Forrest Fenn, creator of a decade-long treasure hunt in the Rocky Mountains, passed away at the age of 90. His audacious challenge captured the imagination of hundreds of thousands of people who searched for the riches both online and on the ground, was blamed for the death of five individuals who had their hunt go tragically awry, and inspired at least two people to break into Fenn's property looking for insight into the location of the treasure. Although he announced that the hunt had been solved back in June, Fenn still kept secret many answers to the mystery, such as where the treasure had been hidden, which may now be lost forever.

Regardless of where in the world one might be, it's almost certain that there are tales of shapeshifters as part of the cultural fabric. On Thursday night's program, ghost hunter John Kachuba discussed these individuals who are said to be able to transform into animals or beings at will. He indicated that there are actually two types of shapeshifters, those who change externally, like a werewolf, and those who undergo a transformation internally in a manner akin to a shaman. Kachuba also noted that a neolithic cave drawing of a human sporting antlers suggests that the concept of a shapeshifter stretches all the way to antiquity.

Easily the weirdest story of the past week came by way of Knoxville, Tennessee, where the sighting of a tiger on the loose by a sheriff's deputy sparked a fevered search for the creature. Although several departments have teamed up to look for the creature by both air and land, as of this writing, the animal has yet to be found. Adding a layer of mystery to the entire odd affair, no one is sure where the tiger could have come from as nearby zoos and animal sanctuaries say that they can account for all of their felines. This would seem to suggest that the animal may have been an illegal pet, in which case it's unlikely that its owner is going to come forward to claim the creature anytime soon.