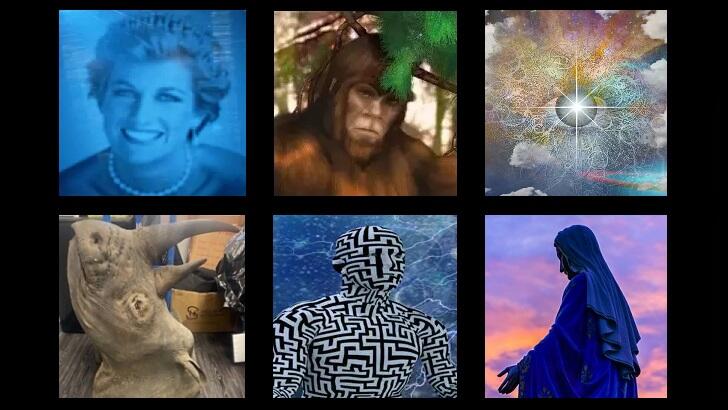 The mysterious death of Princess Diana, conversations with God, and cases of high strangeness were among the fascinating realms explored this past week on Coast to Coast AM. And, here at the C2C website, we told you about a video that seemingly shows an enormous Bigfoot, a rhino head randomly left on a sidewalk in Pennsylvania, and a Virgin Mary statue that somehow survived Hurricane Ida unscathed. Check out our round-up of highlights from the past week ... In Coast You Missed It.

While many psychic mediums believe that they can communicate with spirits on the 'other side,' is it possible to actually talk to God? This tantalizing question was explored on Monday night's program as modern-day spiritual messenger Neale Donald Walsch discussed his purported contact with the divine creator. He explained that these communications began with him writing questions to God on a legal pad and, shortly thereafter, he began to hear a voice that he believes was the supreme being. He blamed the tumultuous nature of society on the many differing opinions of what God represents and argued that if there was a universal understanding of what the divine creator truly is, then peace on Earth just might be possible.

One of the best potential Bigfoot videos to come along in quite some time popped up online this past week and it was so remarkable that many observers said it was simply too good to be true. The footage in question is said to have originated from Idaho, although the circumstances behind the scene are, unfortunately, unknown. Be that as it may, the video shows a close-up view of a massive Sasquatch walking through a wooded area. To Bigfoot believers, the footage is nothing short of revelatory, but skeptics argued that the incredibly clear view of the creature and the murky nature of the video's origin made it rather suspect.

Speculation that long swirled around the death of Princess Diana as many believe that her tragic passing was actually a well-orchestrated assassination. On Saturday night's program, journalist and attorney Sarah Whalen argued that this was indeed the case, pointing to Diana's entrance into the political arena with her landmine activism as the moment in which she crossed a proverbial line that raised the ire of the Royal Family. She also theorized that the 1997 car crash that took Diana's life may have been part of an elaborate pagan sacrificial system dating back centuries and that the 'inner circle' of Windsors was probably distanced from the assassination in order to exclude them from direct culpability.

This past week saw a pair of very strange incidents involving truly bizarre out-of-place objects, beginning with a video from the U.S. Transportation Security Administration which showed a chunk of raw chicken meat inexplicably circulating on an airport luggage conveyor belt. Based on its cubic shape, the puzzling wad of poultry was likely initially checked onto the flight inside of a cooler by a hasty traveler who did not secure the package very well. Meanwhile, in Pennsylvania, cops were left scratching their heads after a taxidermied rhinoceros head was found sitting on a sidewalk. As one might imagine, authorities are now trying to figure out where it came from and why it was mysteriously abandoned.

At the periphery of the paranormal are various phenomena which do not quite fit any particular criteria and might best be called 'high strangeness.' These unique incidents were explored on Tuesday night's program as Fortean researcher Justin Bamforth detailed his investigations into hard-to-define cases of Men in Black, doppelgangers, and 'phantom crashes.' This last phenomenon, he explained, involves an individual hearing a cacophonous sound, but can find no source for the puzzling noise. Although the case of these mysterious 'crashes' is a mystery, Bamforth posited that they could be the result of a "stress-induced psychokinetic discharge."

Hurricane Ida cut a path of destruction from the Gulf Coast all the way up to the Northeast this past week, but amid the chaos came something of a sliver of hope in the form of a Virgin Mary statue that somehow went unscathed as the storm swept over a town in Louisiana. The jaw-dropping discovery was made by a TV viewer who was watching drone footage of the community of Grand Isle, which was devastated by the hurricane. To their profound surprise, they spotted a statue of the Virgin Mary clearly still standing outside of a home that had been completely destroyed. The stunning sight was understandably interpreted by some as a miraculous occurrence meant to raise the spirits of those who had lost so much in the disaster.