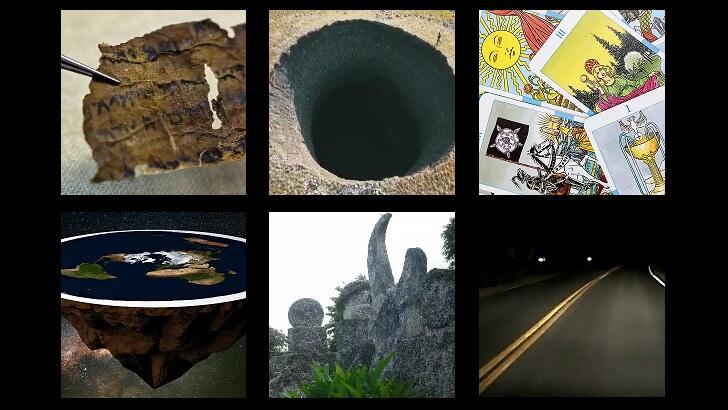 Coral Castle, tarot reading, and an academic firestorm surrounding a controversial piece of papyrus were among the riveting realms explored this past week on Coast to Coast AM. And, here at the C2C website, we told you about a gargantuan crater found in Russia, an eerie 'shadow creature' filmed in Maine, and a pair of Italian Flat Earthers who got lost trying to find the 'edge of the world.' Check out our round-up of highlights from the past week ... In Coast You Missed It.

The power of the tarot took center stage on Tuesday night's program as Theresa Reed detailed her nearly 30 years of work with the wildly popular divination tool. She explained that her particular style of reading relies on intuition honed from countless sessions with the cards coupled with a strong understanding of their foundation. Reed also dispelled some misconceptions surrounding the tarot, noting that cards thought by some to have a perilous meaning, such as 'Death' and the 'Tower,' can actually have a positive interpretation as well.

The monstrous power of Mother Nature was on full display this week by way of a jaw-dropping video of an enormous crater that appeared in Russia's Arctic Tundra region. Inadvertently discovered by a news crew flying overhead, the staggering chasm located on the country's Yamal Peninsula measures 165 feet deep. In the face of online speculation that the ominous pit was somehow related to UFOs or a clandestine weapons test, an expert in Russia quickly explained to the public that it was a natural phenomenon brought about by melting permafrost.

The mysterious Coral Castle in Homestead, Florida has long perplexed esoteric researchers who have wondered how Edward Leedskalnin could have built the elaborate site. On Monday night's program, R.L. Poole shared details from his extensive investigation into the location and its mercurial creator. He argued that Coral Castle was crafted using a secret scientific technique related to magnetism and Leedskalnin hid a code in the stone which, when applied to his writings, revealed a collaboration with the wealthy heiress Doris Duke.

A curious piece of footage that surfaced this week seemingly shows some kind of shadow creature crossing a dark and spooky road. The video came courtesy of the dashcam from a motorist in Maine who was driving through the community of Yarmouth a few days earlier and, at the time, didn't notice anything out of the ordinary from the trip. When looking back at his footage to find out if it captured a deer that he had spotted on the drive, the man was stunned to see a baffling black form zipping from one side of the road to the other in front of his vehicle. A supernatural visitor, paranormal activity, or a trick of light and shadow? We're still not sure.

The fantastic story of how a scrap of papyrus purportedly indicating that Jesus was married to Mary Magdalene set off a firestorm in the religious studies world a few years ago was discussed in fascinating detail on Saturday night's program by journalist Ariel Sabar. He recounted how the controversial piece of paper made its way to a Harvard professor who unveiled her blockbuster discovery at a conference in 2012 as well as how the findings quickly fell apart when the artifact was found to be a fraud.

By far the most bizarre story of the week came from Italy where a pair of Flat Earth enthusiasts tried to find the 'edge of the world' and wound up on an epic misadventure. The duo began by breaking coronavirus-related travel restrictions to embark on a road trip that led to them selling their car, buying a boat, and sailing to an island hundreds of miles away in the opposite direction of what they believed to be the literal end of the Earth. Despite failing in their mission, the pair persisted twice more, much to the chagrin of authorities who kept trying to get them to adhere to the country's pandemic quarantine.