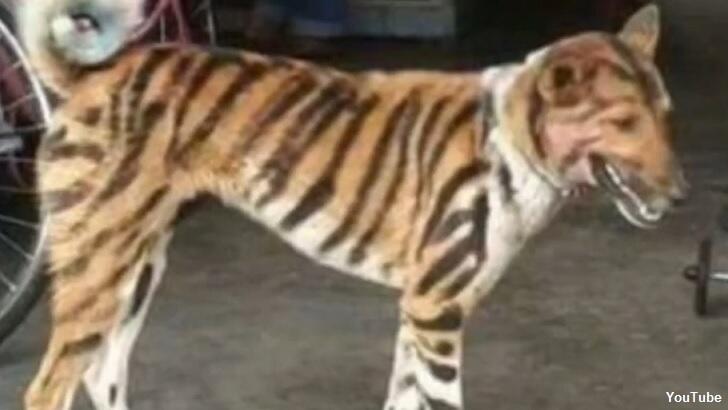 An Indian farmer fed up with monkeys feasting on his crops came up with a rather clever solution to the problem by painting stripes on his dog so that it looked like a tiger. The weird dye job was reportedly the brainchild of Srikanta Gowda, who resides in the city of Shivamogga. Residents of the region have been struggling in recent weeks with a spate of incidents in which voracious wild monkeys have decimated a number of farms.

Hoping to avoid having his coffee and areca crops fall victim to the hungry primates, Gowda initially placed a stuffed tiger in his field and that seemed to do the trick. However, when the doll's color faded due to the sun, the monkeys were no longer afraid of the 'creature' and descended upon the property once again. Realizing that he needed to take drastic measures to prevent losing his crops, the beleaguered farmer found an answer by way of his dog Bulbul.

Gowda proceeded to use some hair dye to paint stripes on Bulbul's body, which resulted in the dog resembling a tiger. The ingenious idea proved to be a success as he says that he walks the animal through his fields twice a day and has witnessed frightened monkeys flee the property at the sight of the 'ferocious' creature. According to Gowda's daughter, other farmers in the area have been so impressed with Gowda's guard dog that they have begun copying the concept with their own pets. Let's just hope that the sudden increase in 'tigers' in the area doesn't result in an influx of big cats coming to the region looking for friends.