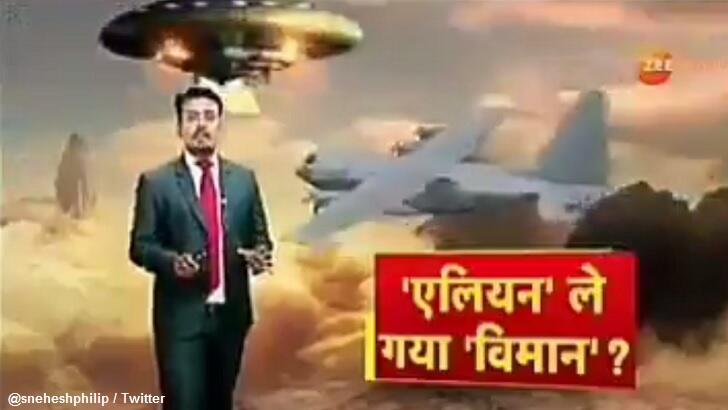 A television channel in India is under fire for suggesting that a military aircraft that went missing earlier this month was actually taken by aliens. The puzzling disappearance of an Indian Air Force transport aircraft on June 3rd captivated the country and garnered considerable media coverage as an extensive search for the lost airliner turned up nothing. In the absence of any information on the plane's whereabouts, speculation began to run rampant and apparently spilled over onto the airwaves of TV station Zee Rajasthan.

During a bizarre segment discussing the missing airliner, an anchor with the channel put forward the fantastic argument that the plane had been "taken away by aliens." Fortunately for viewers who could not conceive of such a scenario taking place, the program featured a rather rudimentary animation showing a classic flying saucer encountering the aircraft and subsequently capturing it via a beam. Adding one extra layer of weirdness to the story, the anchor reportedly theorized that the sinister aliens behind the plane's disappearance were working with the Chinese government.

As one can imagine, the outlandish extraterrestrial hypothesis was met with harsh criticism from viewers in India, who lambasted the station for making a mockery of the missing airliner. Zee Rajasthan wound up looking even worse this week when Indian Air Force officials announced that they had found the wreckage of the crashed airliner and that none of the 13 passengers survived the tragic accident. The situation is strikingly similar to something which took place on American television a few years ago when a CNN anchor postulated that perhaps Malaysian Airlines Flight 370 had been sucked into a black hole.

Offered without comments. The missing AN 32 could have been "taken away by aliens" pic.twitter.com/qZsEA9ASIf