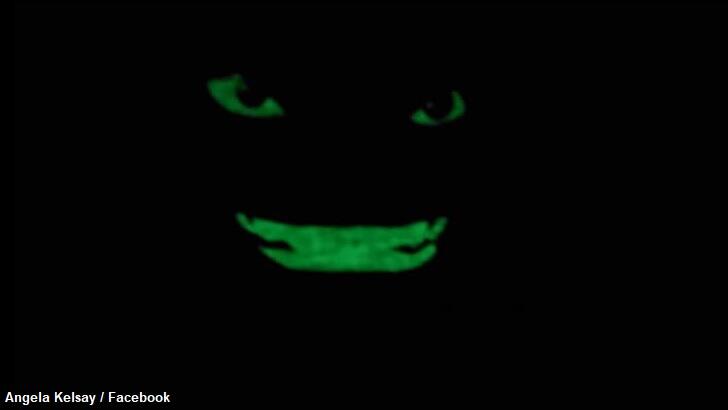 An Indiana woman's tale of encountering a glowing demonic face in the middle of the night has gone viral thanks to its amusing ending. The unnerving experience occurred last month, Angela Kelsay explained in a post on social media, when she was woken up by the sound of her bedroom door creaking open. Initially suspecting that her two-year-old son had entered the room, the mom was taken aback when she spotted "a set of terrifying glowing eyes and mouth" lingering in the doorway.

Frozen in fear and bewildered by what she was seeing, Kelsay's terror escalated as the face silently "drifted a few feet closer" to her bed. "This thing didn't make a sound," she recalled, noting that this was particularly unsettling since their home is 120-years-old and the floors are prone to making all manner of eerie creaking sounds. Uncertain about what to do next, Kelsay proceeded to ask for protection from God in her mind, but this did not seem to help as "the thought no sooner left my head and the demon moved closer."

When a second attempt at summoning some divine intervention failed, the woman mused that "I knew the Lord had forsaken me. I was on my own." As she considered whether or not she could thwart the demon by way of a physical attack, Kelsay said, "suddenly it whispered... 'Mommy?'" Recognizing that it was her son's voice, she quickly turned on a bedside light and saw the source for the sinister-looking scowl that had tormented her. It turned out that the boy was wearing a pair of Teenage Mutant Ninja Turtle pajamas which featured a glow-in-the-dark face.