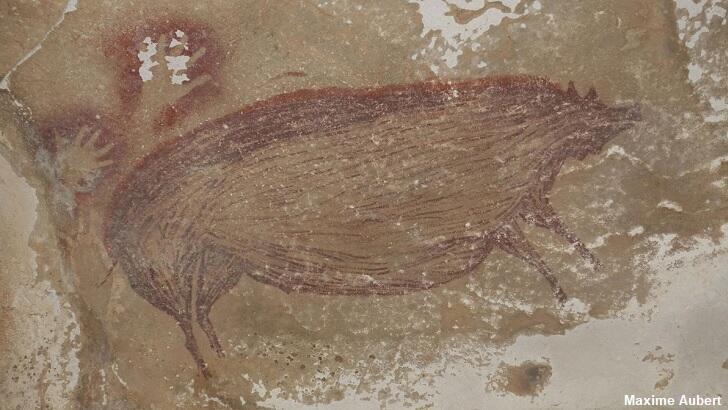 An ancient drawing of a pig that was discovered in an Indonesian cave may be the world's oldest depiction of an animal. The artwork, which measures a whopping 4.5 by 1.8 feet, was reportedly first found back in 2017 by researchers studying prehistoric paintings in a remote cavern system located on the island of Sulawesi. Dating tests subsequently done on the drawing determined that it was created at least 45,500 years ago.

Assuming that the age of the painting is correct, it would constitute not only the world's oldest drawing of an animal, but also the most ancient figurative artwork ever found. The creature featured in the prehistoric piece is a warty pig native to the island that was presumably a prime target for hunters living there long ago. Experts analyzing the image theorize that its sizeable nature was meant to convey the importance of creatures in providing sustenance.

The cave system on Sulawesi previously yielded a similarly historic painting back in late 2019 in the form of what was then believed to be the oldest depiction of a hunting scene. That particular piece, which made headlines back in 2019, was determined to have been created around 44,000 and held the proverbial 'record' for an ancient figurative drawing until this newfound warty pig picture was discovered to be even older.