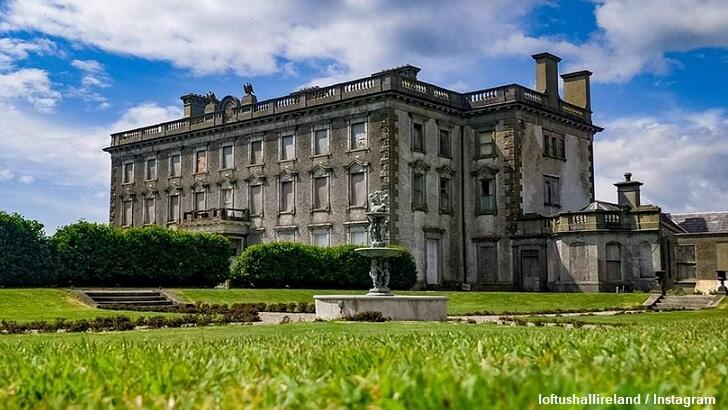 Ireland's Most Haunted House Up for Sale

A massive mansion in Ireland which boasts the reputation of being the country's most haunted house and, legend has it, was once visited by the devil himself, has reportedly gone on the market. Known as Loftus Hall, the 22-bedroom estate was built on the ruins of a previous manor, Redmond Hall, that stretched back to the 1300s. In light of that, as one can imagine, the location has a rich history attached to it, specifically of a spooky nature.

Easily the most infamous tale attached to the site is an incident said to have occurred around 1775 when a ship arrived on the shore outside of the mansion during a storm and a mysterious stranger seeking shelter emerged. Welcomed into the home by the family staying there at the time, the man quickly endeared himself to the group, specifically a young lady named Anne. While the two were playing cards together one evening, she bend down to pick up a dropped card and noticed that the man possessed cloven hooves instead of feet.

Stunned by what she saw, the story goes, Anne screamed in fright and the stranger revealed that he was, in fact, the devil before vanishing in a burst of flames. The young woman subsequently became severely traumatized by the incident and suffered a mental breakdown, which led her family to lock her away inside the mansion. In keeping with all good ghost stories, it is said that the home wound up being plagued by eerie paranormal activity ever since Anne passed away.

Loftus Hall passed through the hands of various owners over the decades and centuries after that and was eventually purchased in 2011 by Aidan Quigley, who turned the site into a supernatural attraction which hosts ghosts tours and events. After nine years of presiding over the property, he has decided to put the location up for sale with an asking price of around three million dollars. Quigley, who is selling the estate on his own, mused that "I'm not even a chapter, I'm a footnote, in its history" and soon someone else will come along to preside over the notoriously haunted site.