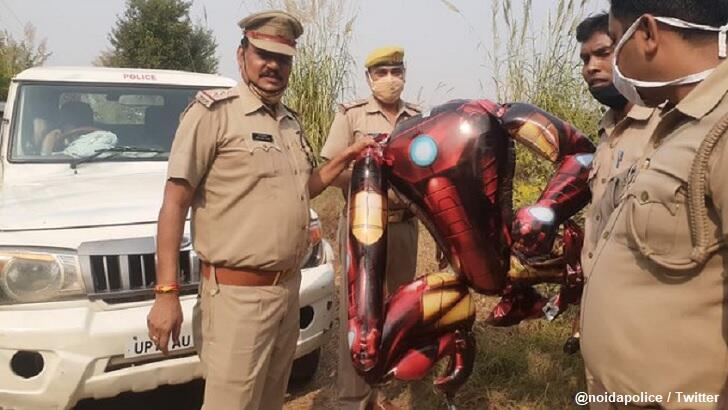 A humanoid-shaped object descending upon a village in India sparked fears of an alien invasion until authorities identified the 'visitor' as merely a life-size Iron Man balloon. The bizarre panic reportedly occurred on Saturday in the community of Dankour when residents spotted what appeared to be some kind of entity floating in the sky. Their mystification quickly turned to concern when the flying humanoid slowly began falling from the sky and ultimately landed around some bushes near a canal.

Given its aerial origin and the fact that the strange entity appeared to be moving after it had come down to the ground, many villagers suspected that it was some kind of ET and refused to go near it. Fortunately, a call to the authorities squashed their concerns about an alien invasion as it was soon determined that the 'space brother' was, in fact, a helium balloon depicting Iron Man which had falling from the sky because it started to deflate.

As for why it seemed to be moving once it touched down, a police spokesperson explained that "a part of the balloon was touching the flowing water in the canal which had led it to shake." Authorities blamed the balloon's humanoid shape and the robotic-looking design for why the villagers had believed it was an alien. After checking to ensure the object was harmless, cops confiscated the balloon and are now trying to figure out who set it loose in the first place.