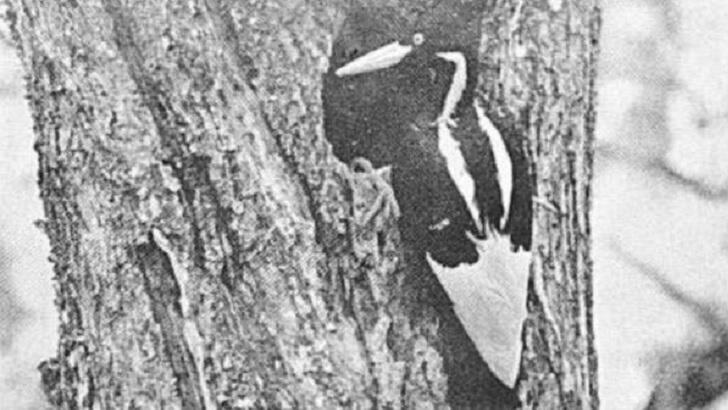 The subject of decades of seemingly fruitless searching, the famed ivory-billed woodpecker has been declared extinct by the U.S. Fish and Wildlife Service. The rather sizeable bird, which averaged around 20 inches in length and boasted a 30-inch wingspan, is among 23 species that the department has proposed removing from the Endangered Species Act because, "based on rigorous reviews of the best available science," they appear to no longer exist. The list of doomed species includes a variety of birds, fish, mollusks, and even a plant, but undoubtedly the most intriguing addition to the list is the ivory-billed woodpecker by virtue of its status as a creature akin to America's version of the Tasmanian Tiger.

Once residing in the wooded areas of the southeastern United States, the last scientifically accepted sighting of the ivory-billed woodpecker was in 1944 and the bird was added to the endangered species list in 1967. However, there have been persistent claims that the creatures may still exist to this day, including one instance in 1971 wherein a witness purportedly photographed the bird, but the images were deemed inconclusive. Over the last two decades, interest in the ivory-billed woodpecker has seen something of a renaissance with multiple expeditions in search of the bird being conducted in various parts of the southeastern United States.

These endeavors produced a bevy of tantalizing indications that the ivory-billed woodpecker may still exist, including eyewitness reports, sound recordings of what is believed to be the bird's distinct call, and even video footage in a handful of cases. While the positive findings of one expedition were published in a peer-reviewed journal, the different efforts to find the bird have apparently failed to produce the blockbuster evidence that would fully confirm in the minds of the mainstream scientific community that the ivory-billed woodpecker did not die out decades ago.

In announcing their proposal to remove the 23 species from the endangered list due to extinction, the U.S. Fish and Wildlife Service said that they will accept feedback from the public for the next 60 days before rendering a final decision. As such, if there is truly a case to be made for the ivory-billed woodpecker still being in existence, the proverbial clock is ticking. That said, regardless of what the bird's classification winds up being, it's a safe bet that ambitious researchers and scientists will continue to scour the region in the hopes that they will stumble upon the elusive creature and prove that it has not been lost.