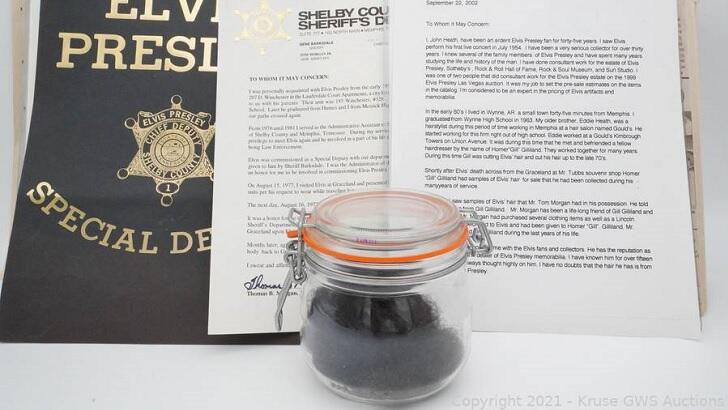 Jar of Elvis Presley's Hair Sells for Staggering $72,500 at Auction

In a testament to the enduring popularity of Elvis Presley, a jar of the late King of Rock and Roll's hair was recently sold for a staggering $72,500 at an auction of such one-of-a-kind memorabilia. According to Kruse GWS Auctions, which facilitated the sale this past Saturday, the "baseball-sized specimen" had been collected by Elvis' personal barber Homer Gilleland over the course of several years as he traveled the world tending to the musician's iconic pompadour. Adding an additional layer of weirdness to the item, the auction house declared that it just so happens to be the "most well-documented collection of Elvis' hair in the world."

Their reasoning for this bizarre boast is that the jar of hair has quite the backstory beyond merely being collected by Gilleland. They explained that the King's former barber actually gave the object to friend Thomas Morgan, who was also friends with Elvis, who subsequently sold the item at an auction back in 2002. In the process of that sale, the hair went through a rigorous authentication process wherein both the world's leading authority on Elvis memorabilia and "the world's most trusted authority in the field of hair collecting" confirmed that it was genuine. Additionally, a slew of paperwork, including "a binder full of airline receipts" from when Gilleland was Elvis' barber, round out the supplementary material that confirms the item is the real deal.

While the sale price of $72,500 this past weekend was undeniably whopping for a jar of hair, it's actually significantly less than the item fetched at auction nearly 20 years ago, when it sold for an astounding $115,000. Why the object wound up depreciating in value is anyone's guess, though one might surmise that the passage of time and fading memories of The King played a part. Remarkably, the peculiar bundle of procured hair was not the centerpiece of Saturday's auction as the sale included Elvis' legendary jumpsuit from his 1972 Madison Square Garden shows, which sold for a whopping $1,012,500.