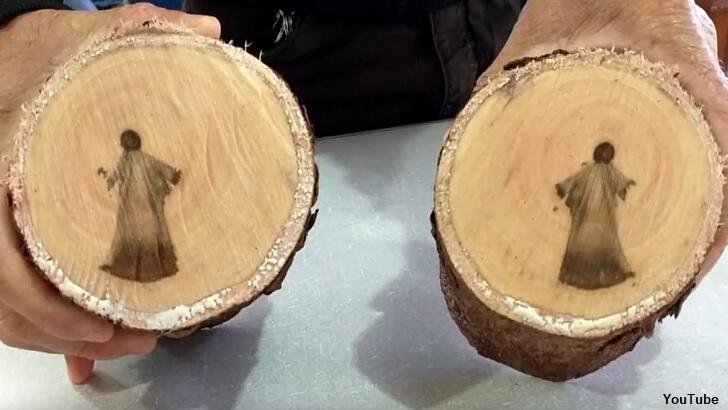 Workers pruning trees in Brazil could not believe their eyes when they sliced off a branch and noticed that the trunk featured a marking which bore an uncanny resemblance to Jesus Christ. The astonishing discovery was reportedly made in the town of Itaquirai during a project in which an area of the community was being cleared for a new road. The job came to a sudden stop when one particular tree branch was being sliced off and the team noticed something peculiar about its trunk.

They initially thought that the odd mark looked like a butterfly, but the chainsaw broke before they could get a better look at the curious spot. Upon fixing their equipment, team leader Odimar Souza recalled, they resumed cutting and "that was when this piece of perfection appeared." Pictures of the proverbial 'holy wood' were subsequently posted online and, as if often the case with such potentially miraculous occurrences, the photos quickly went viral in the country.

As evidenced by Souza's description of the spot, some observers expressed the belief that the miraculous-looking marking was some kind of divine message. However, there were others who were more skeptical of the suggested spiritual nature of the find, with one person positing that it was simply a burn mark. For their part, local churches in the area have yet to weigh in on the remarkable tree branch and its exact whereabouts at this time are uncertain.