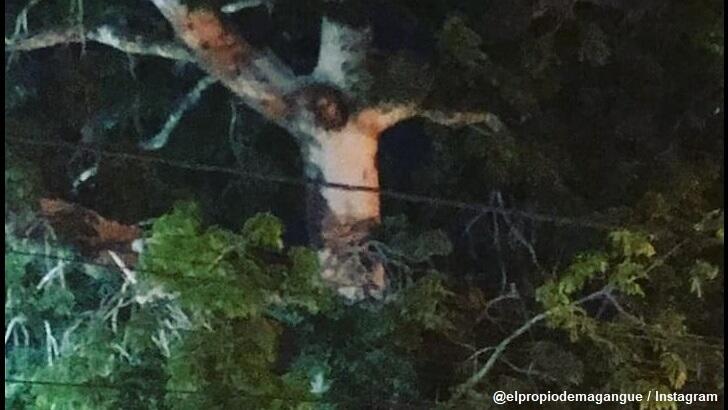 Residents of a village in Colombia flocked around a tree in wonder and reverence when they noticed that it bore an uncanny resemblance to Jesus Christ on the cross. The strange scene reportedly unfolded in the community of Magangue last week a few days after the country announced a nation-wide lockdown to thwart the spread of the coronavirus. Although people were instructed to remain inside their homes, the discovery of the eerie-looking tree led many to disregard the order so that they could see the curious tree.

"People ran with candles and turned that place into a pilgrimage point," said local journalist Rodolfo Zambrano. Footage from the first evening in which the image in the tree had been discovered shows a sizeable crowd of residents gathered around the site. "They are here to see the figure of what they say or believe is the figure of Christ," explained cameraman Rafael Rodriguez, "they have forgotten about coronavirus and are currently here looking at this figure."

As one can imagine, that latter observation has raised concerns among local authorities as people crowding together is precisely what they want to avoid. With that in mind, police were quickly called to the area to disperse the gathering and send residents back to their homes. And, in a testament to either the miraculous nature of the event that evening or the trickery of light and shadow, a subsequent photo of the tree taken the follow day (which can be seen in the second image posted below) seemingly stripped it of its spiritual nature as it was revealed to be rather ordinary in its appearance.