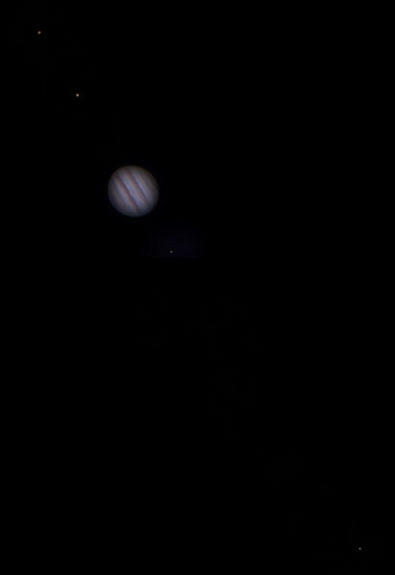 Jupiter with the Galilean Moons

I've been waiting here in Washington state for the clouds to part for some time. I missed the 3 moon transit of Jupiter last week due to the cloud cover but last night (January 29, 2015) I finally had an opportunity. A rare clear Winter night in Western Washington. I took advantage of the cloud free skies to capture this image of Jupiter and its 4 Galilean Moons, Io, Ganymede (the largest moon in oursolar system), Europa, and Callisto at the very bottom right of the image. Iwas fortunate because the fog began rolling in shortly after I finished up for the night. The clouds are back tonight!

To capture this image, I used a Canon 60D camera with a 4X powermate attached to an ES127mm refracting telescope on an IOptron iEQ45 GEM. The image is a result of approximately 400 shots at 1/30sec, ISO-250, aligned and stacked in Registax with final processing in Photoshop Elements.