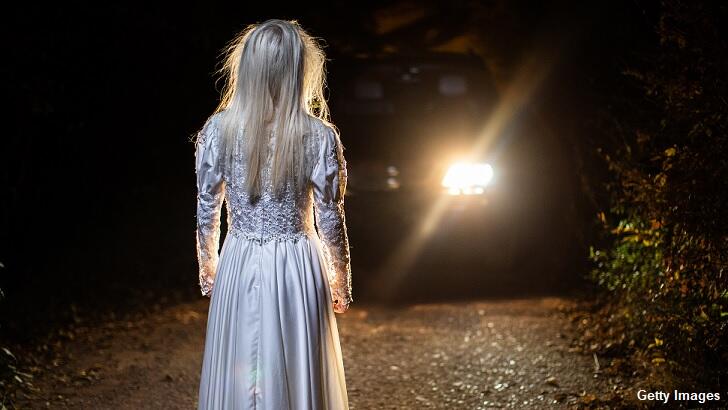 A series of ghost sightings along a road in Texas has led some to wonder if the spirit seen by witnesses could be the legendary ghost known as 'Lla Llorona'. According to a local media report, the strangeness began when a paranormal research group in the city of Laredo asked if people in the community had ever encountered an apparition dressed all in white. This led to several residents sharing accounts of seeing just such a spirit and, intriguingly, most of them recalled having the experience while driving along a very specific spot in the city known as Mines Road.

One individual recounted passing "a woman dressed in a long white dress with loose dark hair." The mysterious stranger, the resident said, was "quietly walking with composure" and appeared "as if she were sad or upset about something." This description was echoed, in a sense, by an intriguing image (seen below) taken by a motorist who was driving along that stretch of road as well. Although he did not notice anyone on the side of the road at the time, when he reviewed the video later, presumably after hearing about the sightings, he was amazed to see an eerie white blur along the side of the road.

By virtue of the apparition's description as well as Laredo's location along the border, paranormal researchers in the area have deduced that the reports could be that of an iconic ghost from Mexican folklore known as La Llorona. Although the tale varies slightly by location, the chilling spirit is largely said to be a weeping woman who is mourning the drowning death of her children which she caused. "There is definitely something going on here," area investigator of the unusual, Edgar Vega, mused about the reports, "I do believe that this is none other than La Llorona."

His reasoning for this assessment is that the apparition is reported to be "she is wearing white, seems sad and there is water." He also suggested that the spirit is more likely to appear following a lengthy period of rain. That said, he conceded that the La Llorona hypothesis it not without some holes as "several people I have spoken to have said that the entity is very quiet," which contrasts with the classic accounts of the spirit wherein she is said to wail about her lost children. As one might imagine, authorities and local officials in Laredo say that they have heard nothing about the ghost said to lurk on Mines Road. Vega hopes to change that by conducting an investigation of the area in the not too distant future to possibly get to the bottom of the mysterious sightings.