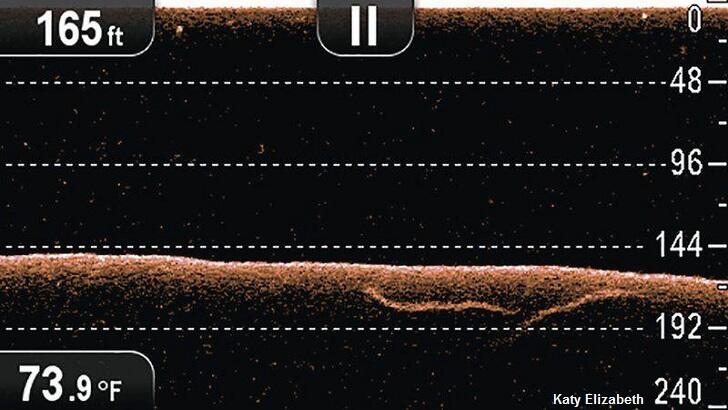 A dedicated cryptozoologist in Vermont suspects that her boat's sonar may have spotted the legendary 'monster' said to lurk in Lake Champlain. According to a local media report, Katy Elizabeth has spent the last seven summers searching the site for signs of the famed creature affectionately known as 'Champ.' She does this by way of expeditions on Lake Champlain in her boat known as 'Kelpie' nearly every day.

At the end of one such trip earlier this month, Elizabeth says, the boat's sonar picked up two strange anomalies "about 165 feet down." Unfortunately, it seems that the fates had conspired against her, in a sense, as the vessel was running out of gas at the time, so she was unable to remain in the area for long. That said, Elizabeth took several dozen screen captures of the curious sonar display.

It was not until the next morning that she took a closer look at the images and was stunned to see that the two anomalies appeared to be a pair of snake-like creatures. "I started crying. I was shaking," she recalled, "I knew it was Champ." In Elizabeth's estimation, one of the possible creatures looks to measure around 25 feet long and, when she zoomed in on the images, the oddities appeared to sport "protuberances on their heads, maybe for echolocation."

Elizabeth believes that those features would explain previous echolocation readings which she has picked up in the waters of Lake Champlain that seemingly have no natural source. Since the sighting, she has sent the images off to experts for analysis and plans to return to the spot where the sonar picked up the anomalies in the hopes of catching another glimpse of the creatures or, at the very least, showing that they were not a natural feature of the area.

Author Mark Shaw discussed the suspicious death of Dorothy Kilgallen. Followed by historian Jude Southerland Kessler, on the history and success of the Beatles, and the life of John Lennon.