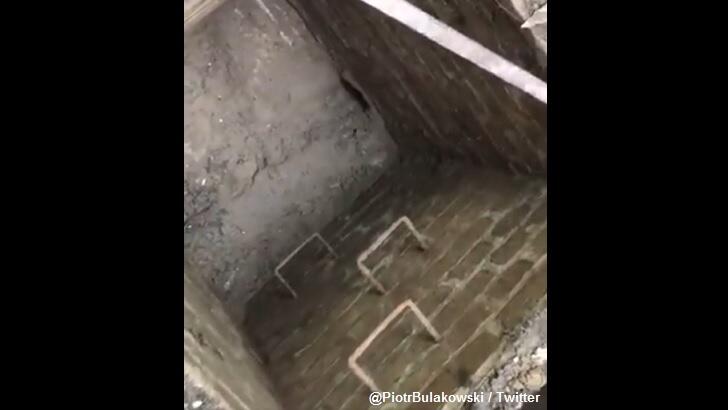 The latest search for the legendary lost Amber Room failed to find the riches which have eluded treasure hunters since the end of World War II. In what seems to be something of an annual occurrence, headlines were made last month when a researcher claimed to have located a curious spot in a Polish town which he believed could contain the ornate gold and amber paneling that was stolen from a Russian palace by the Nazis during WWII and subsequently went missing during the chaotic final days of the conflict.

What made this most recent 'area of interest' particularly intriguing is that treasure hunter Karl-Heinz Kleine and his team had not only found a subterranean void in the community of Wegorzewo, but they'd also stumbled upon a hatch that would presumably provide them a way into the chamber. The mysterious location was made all the more tantalizing by the fact that a tree had grown over the entrance, meaning that no one had accessed the underground chamber for a very long time.

And so it was with great fanfare that a team of workers from the Mamerki Bunker Museum reportedly descended upon the spot late last month with the hopes of unearthing the Amber Room and solving the mystery once and for all. As the tree was being removed and the area excavated, museum director Bartlomiej Plebanczyk waxed poetic about how historic it would be to find the fabled riches and mused that "I dream of solemnly handing over the Amber Room to its rightful owner, Russia."

Alas, Plebanczyk's dream was dashed when workers finally gained opened the hatch and found that it led to a fairly shallow shaft which may have once served as some kind of well since it also contained what looked to be a drain pipe. The museum director was not entirely dismayed by the disappointing discovery as he observed that the lack of modern items in the cavity indicated that "no one has opened it since the war." He also suggested that perhaps the dirt floor of the hole could be a false bottom and called for further investigation of the area using ground-penetrating radar.

While the museum director's optimism is admirable, it has now been nearly three weeks since the excavation in Wegorzewo took place and there has been no indication that anything else of note has been found. As such, it's likely a safe bet that the spot will ultimately wind up being yet another once-promising candidate for the Amber Room location that turned out to be as empty as all the others.