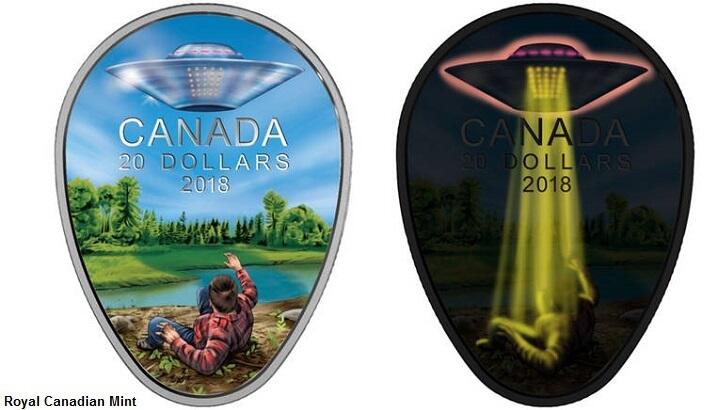 The Royal Canadian Mint has unveiled an absolutely breathtaking new coin which celebrates a legendary UFO encounter in Manitoba.

The incident, known as the 'Falcon Lake UFO event,' occurred in 1967 when a rock hound named Stefan Michalak spotted a pair of flying saucers while he was searching for precious metals and gems.

Much to his amazement, one of the craft actually descended to the ground and landed a little over 150 feet away from him.

Thinking that the UFOs were merely a military test craft that had run into trouble, Michalak actually went up to the landed craft to see if he could offer any assistance

However, he was stunned, upon touching the vehicle, to discovered that it was extremely hot and actually melted the finger tips off of the gloves he was wearing.

Things got even stranger when the craft subsequently began taking off and, in the process, emitted a gas that caused Michalak's shirt to burst into flames and badly burned his chest.

Fifty years later, no one is quite sure what the rock collector encountered that day and the case has become a fixture in Canadian UFO lore.

And so, in celebration of the remarkable event, the Royal Canadian Mint has produced an awesome ovoid-shaped and quite colorful coin that depicts Machalak looking up at the flying saucer.

The collectible features another cool detail in that, when seen in the dark, the UFO and its menacing gas actually glow!

As one can likely surmise, the newly-minted $20 coin, of which only 4,000 have been made, will not be in general circulation and is only available via the Royal Canadian Mint website.