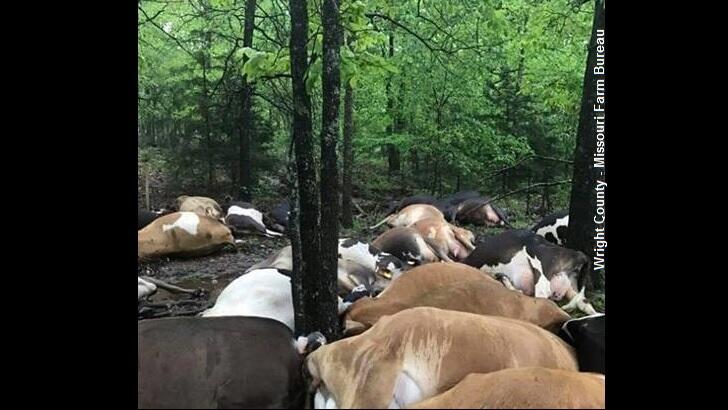 A dairy farmer in Missouri suffered a devastating loss over the weekend when a lightning strike killed an astounding 32 of his cows!

Jared Blackwelder says that the incident occurred around 4 AM after he had finished milking the herd and a powerful bolt of lightning jolted the farm.

"It was so bright, I could hardly see," he told the Springfield News-Leader, marveling that the lightning caused fire to run along the fences of the farm.

When he went to milk the cows a few hours later, Blackwelder came upon a ghastly scene.

"I went down over the hill and seen them laying there," he told the newspaper, "they were just piled on top of each other. They were huddled up, trying to get out of rain."

A local veterinarian who examined the animals confirmed that cause of death was lightning and said that the case was unlike anything he had ever seen, despite tending to farm animals for decades.

Blackwelder estimates the total loss from the downed cattle to be in excess of $60,000 and worries that his insurance may not cover the entire amount.

Beyond the financial ramifications, the farmer expressed a deep affinity for the animals that he had raised from birth and mused to the News-Leader that "it hits you hard."