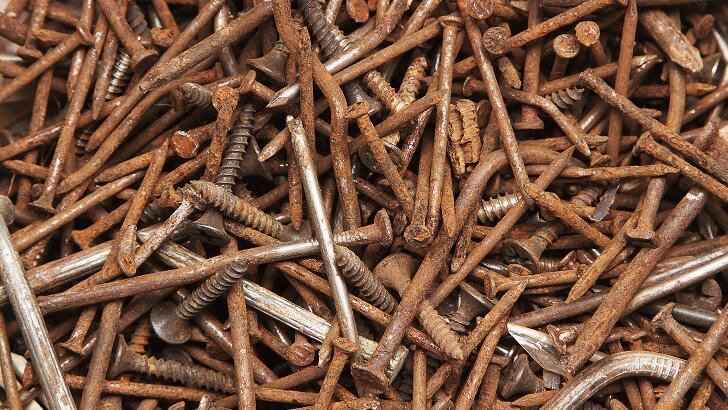 Doctors in Lithuania removed more than two pounds of metal objects from the stomach of a man who told them that he had picked up the bizarre habit of eating the various screws, bolts, and nails after he had quit drinking. The very strange case reportedly began about a month ago when the unnamed patient decided to put down the bottle, so to speak, and embrace a sober lifestyle. However, his plan took an odd turn when the man suddenly felt compelled to start scarfing down small metal objects he found around his house. As one might imagine, the reformed drinker eventually began experiencing abdominal pain from the unorthodox 'diet' and went to the hospital, where doctors were stunned by what they discovered.

An x-ray of the man's stomach revealed a staggering array of metal objects from screws and bolts to nails and knives. All told, surgeons removed over two pounds of the material from the distressed patient's jam-packed midsection. In some instances, one can only wonder how the man even managed to eat the pieces as there were a few that measured a jaw-dropping four inches in length. Ultimately, doctors plucked each and every object from the man's stomach in a procedure that took a staggering three hours because the surgeons had to keep x-raying the man in order to ensure that they had not missed any of the metal pieces.

The treatment was, understandably, unlike anything the medical professionals at Klaipeda University Hospital had experienced before with one surgeon who was on the team marveling that it was a particularly unique case. It is believed that the patient's proclivity for eating the metal material was a psychological condition which arose due to alcohol withdrawal syndrome. The man is currently under observation at the hospital while doctors monitor his recovery from the procedure and attempt to decipher more about his mysterious compulsion. While it's uncertain if the patient will remain on the wagon following his ordeal, the medical professional who treated him can probably be forgiven if they imbibed in a stiff drink following the very strange surgery.