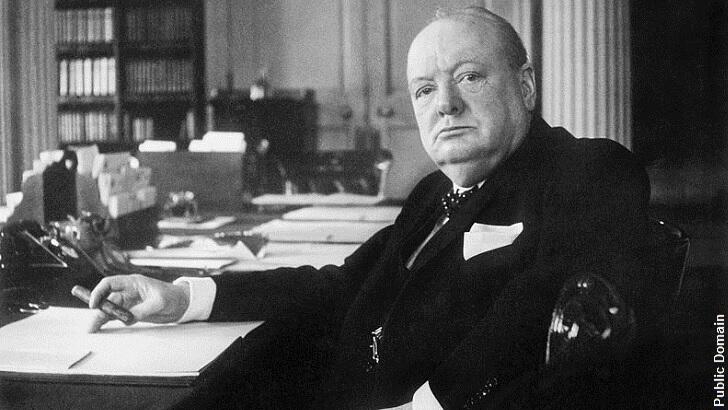 Researchers have uncovered an enlightening piece of writing from Winston Churchill which reveals the renowned British Prime Minister's thoughts on extraterrestrials!

Penned in 1939, the eleven-page article which was never published is provocatively titled 'Are We Alone in the Universe?'

It had somehow gotten lost amidst the voluminous files from his estate and, incredibly, wound up included in a collection that was sent to an American Churchill museum in the 1980's.

For nearly forty years, the enlightening essay sat unnoticed in the museum's catalog of Churchill materials until it was recently found.

Churchill's musings on the chances that ETs exist are remarkably prescient in light on the scientific discoveries made since he wrote the essay decades ago.

In the piece, Churchill argues that it is reasonable to conclude that there are many planets throughout the universe, considering its vast size, and that some of these worlds are conducive to life.

The 'British Bulldog' even speculated that humans would someday travel to the moon as well as Mars and Venus, which were the only two planets that he considered contenders for potential ET habitation.

That particular assessment from Churchill has proven to be somewhat shortsighted as scientists now believe that life could exist in the harsh environments of other planets.

And, in an amusing bit of wishful thinking that echoes the thoughts of many modern day UFO researchers, Churchill noted that sad state of civilization in 1939 left him skeptical that "we are the only spot in this immense universe which contains living, thinking creatures."

To that end, in an observation that would make Copernicus proud, Churchill expressed doubt that "we are the highest type of mental and physical development which has ever appeared in the vast compass of space and time."

Unfortunately, the complete text from the Churchill ET essay has yet to be published, due to copyright concerns, but historians who detailed the work in a newly-published academic paper hope that the piece can be released in full sometime soon.

We can only imagine what the great orator would say today at the notion that we still have yet to find the elusive extraterrestrial life which left him wondering nearly 80 years ago.