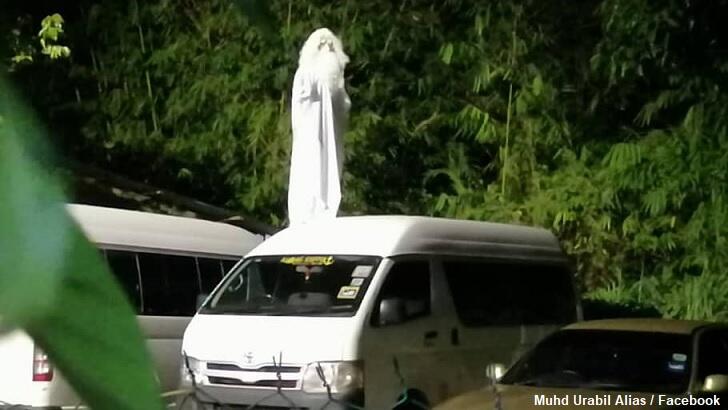 Concerned about youngsters in his community not adhering to the country's coronavirus lockdown, a Malaysian man attempted to scare them straight and wound up causing something of a ghost panic. The odd idea was reportedly the brainchild of Muhammad Urabil Alias, who had grown irritated by the "stubborn" teens that continued to congregate at night in his town of Chukai despite government orders to avoid such gatherings in order to fight the pandemic. And so, over the weekend, he decided to send the youngsters a message by way of some spooky photos that ultimately captured the imagination of Malaysians residents far beyond his neighborhood.

On Saturday evening, Alias posted pictures on social media of an eerie-looking figure wearing a white robe and beard while standing atop a van outside his home. Although the photos were largely made in jest with the hopes that they might scare some teenagers into staying inside, the images quickly went viral in Malaysia as people genuinely believed that the man had encountered a ghost. And, amazingly, it would appear that they served their purpose beyond what even Alias had expected as he marveled that "when I uploaded the pictures on Facebook, everyone panicked and was scared to go out at night."

Be that as it may, the photos have proven to be so popular online that Alias actually expressed regret over the stunt, saying "my wife and I apologize if we have gone overboard." To that end, the faux ghost has even gone so far as to debunk the images by revealing the true nature of the 'spirit' on social media. That may be for the best since one can imagine that the belief that ghosts roaming are the streets is exactly the kind of thing that would inspire bored teens to ignore the lockdown in the hopes of spotting one of the apparitions.

First Half: Writer Richard A. Lertzman will discuss the Rat Pack, a group of entertainers led by Frank Sinatra, and how they and the Mob influenced entertainment during the Sixties. He'll also update his work on Dr. Max Jacobson, nicknamed "Dr....