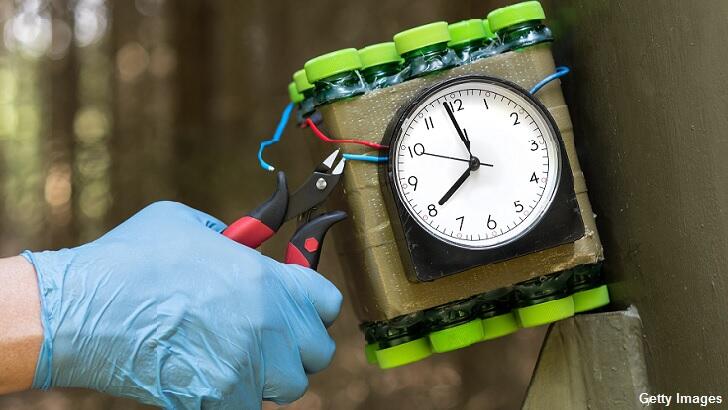 In a bizarre story out of Pennsylvania, a man was arrested for allegedly building a bomb in order to get the attention of police so that he could warn them about potentially hostile aliens. The weird incident reportedly occurred on Sunday morning when, authorities say, David Oxenreider approached the manager of the Bahney House Hotel, where he was staying in the town of Myersville, and informed him that he'd constructed a bomb.

Understandably uneasy about the man's declaration, the proprietor of the establishment asked him to put the bomb in the parking lot behind the hotel and quickly phoned the police. Authorities arrived on the scene shortly thereafter and diffused the device which they said would have been a genuine threat to public safety had it been detonated. Despite their assessment, Oxenreider insisted that his intention was never to cause any harm and offered a truly strange explanation for his actions.

According to court documents, the man told police that "he had an encounter with a UFO ship and aliens" five years ago and was told by the ETs that "humans need to start being good people or else they were going to destroy the Earth with a nuclear laser beam." In an effort to ensure that such a dire scenario did not unfold, Oxenreider informed investigators that he's been trying to share this message with the world, but "no one listens to him."

The purported contactee went on to lament that he has attempted to alert a number of government agencies about the aliens' ultimatum, but his efforts have been futile because "people say he is crazy." As such, Oxenreider claimed that he built the bomb so that the police would speak to him about the ET threat. While it would seem that the man's plan worked in that regard, it came at a considerable cost as he now faces the serious charges of "manufacturing a weapon of mass destruction" as well as "causing or risking a catastrophe."