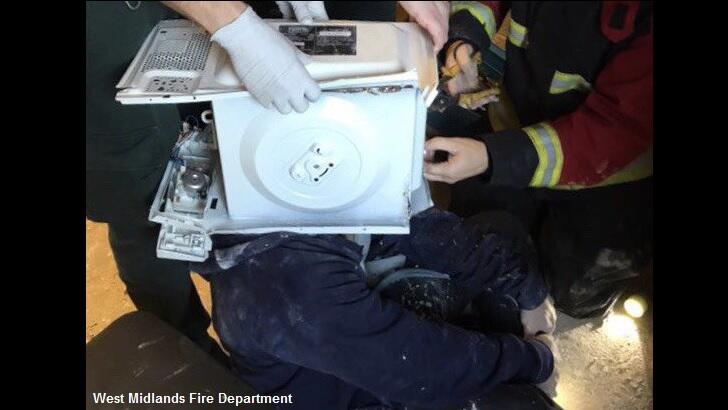 Man Gets His Head Stuck in Cement-Filled Microwave

In a rather bizarre rescue call, firefighters in England saved a young man who had gotten his head stuck in a cement-filled microwave!

The strange predicament unfolded after a YouTube prankster envisioned viral fame and, perhaps, fortune from performing the feat.

However, Jay Swingler quickly discovered that one sometimes falls short when shooting for the stars.

Despite having his head protected by a plastic bag and using a breathing tube to keep him alive, he realized midway through the stunt that it were going awry.

The rudimentary breathing apparatus began failing him and the concrete continued to harden, leading Swingler's panicked companions attempted to free him from the dangerous dilemma.

Following a futile 90 minutes of trying, they finally conceded that they could not help Swingler and called in professional help to put an end to the ordeal.

Fortunately, rescue workers were able to extricate his cranium from the concrete over the course of an hour, much to the young man's relief.

Although Swingler and his cohorts were reportedly apologetic about the situation, authorities were pretty displeased with their antics.

They noted that the call tied up rescue workers who may have been needed by other, more responsible, members of the community who know better than to put their heads inside cement-filled microwaves.

And while one would hope that the pranksters learned their lesson, the fact that they're garnering so much attention for the foolhardy trick suggests that they may have gotten exactly what they wanted, unfortunately.