Home > Articles > Man in Bizarre 'Bubble Ship' Runs Aground While 'Walking on Water' to Bermuda
July 26, 2021 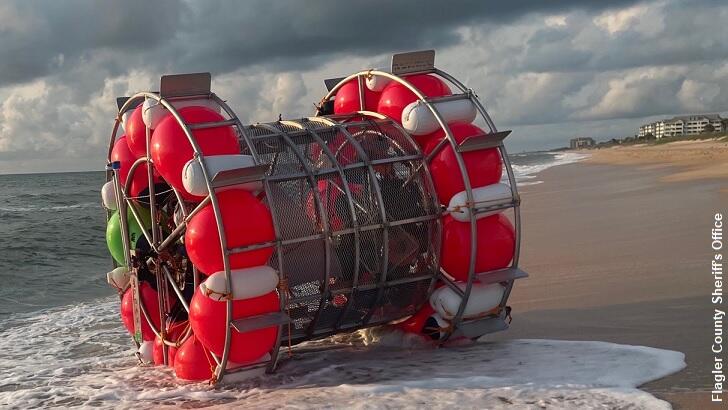 A beachgoer in Florida was understandably bewildered this weekend when they stumbled upon a man at the helm of a curious bubble-like contraption that had run aground while he was attempting to 'walk on water' all the way to Bermuda. According to a local media report, the weird scene unfolded this past Saturday morning on the shore of the state's Flagler County where an observer spotted a strange-looking vessel, of sorts, heading towards them and promptly phoned the police. The unidentified floating object was a large cylindrical ship, of sorts, kept afloat by rings of buoys and balloons which supported a cage-like metallic center. Fortunately, cops investigating the matter found that the oddity was more wondrous than worrisome.

It was quickly determined that the man behind the vessel was an individual by the name of Reza Baluchi and that he was attempting to travel from Florida to Bermuda and then onward up the coast by way of his homemade device. The purpose of the pursuit, he explained, it to raise money for charity and inspire people. Alas, it would appear that Baluchi's mission was short-lived, since his boat wound up in the sand rather than out in the ocean. The unfortunate turn of events marks at least the third occasion in which he has crossed paths with authorities as a pair of previous attempts resulted in him needing to be rescued. Be that as it may, Baluchi was undeterred by the latest setback, declaring "I’ll never give up my dream."