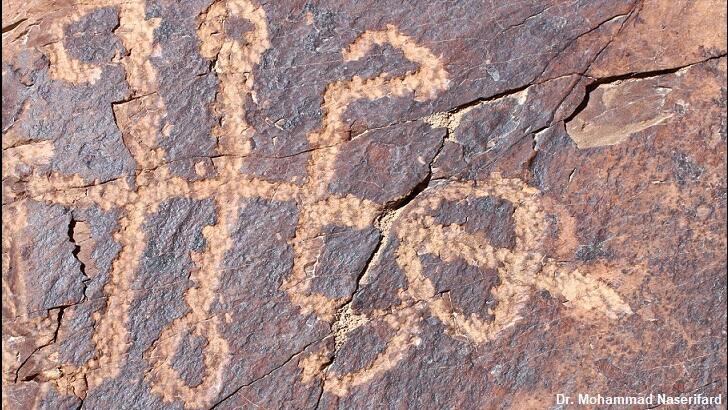 Scientists say that an ancient cave drawing discovered in Iran depicts a half-man, half-mantis creature. The curious petroglyph was reportedly found a few years ago in the Teymareh region of the country where such rock carvings are fairly plentiful. However, this particular piece of artwork, which measures around five-and-a-half inches long, proved to be rather intriguing to experts as drawings of invertebrate animals are rarely seen.

As such archeologists set about trying to solve the mystery of the weird six-legged petroglyph and enlisted the help of entomologists to possibly identify what insect was being depicted. The scientists were able to discern from the triangle shape of the creature's head that it was a mantis. Amazingly, they were even able to narrow down the genus of the insect, Empusa, by way of a small detail on the cranium.

However, researchers say, it would seem that the rock art was meant to depict more than a mere mantis. That's because the middle limbs of the drawing align with what archaeologists say is a common human motif, known as 'Squatting Man,' found in petroglyphs throughout the world. This has led to the conclusion that the work was meant to depict a human-mantis hybrid of sorts. While such entities have long been a part of ancient religious lore, one can't but note that, in modern times, there are a number of tales involving encounters with mantis-like alien beings.