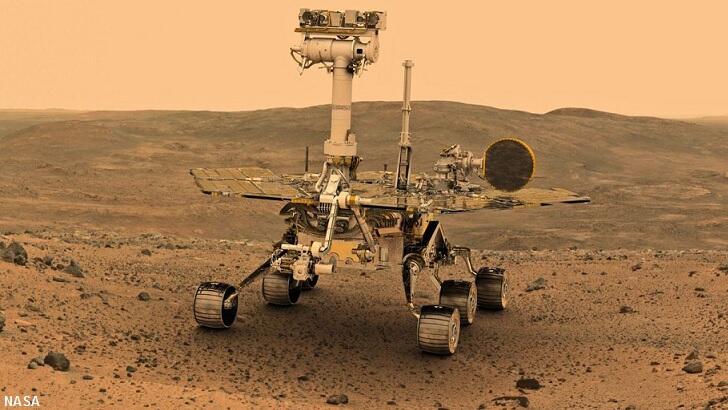 After fifteen glorious years exploring the surface of Mars, NASA's Opportunity rover has been officially declared dead by the space agency. The craft had reportedly stopped communicating with engineers on Earth after being pounded by a dust storm last June. Hopes that the craft may have recovered from the ordeal were dashed this year when Opportunity continued to remain unresponsive to numerous recovery commands.

NASA mercifully concluded the mission on Tuesday evening with a final message to the craft in the form of the Billie Holiday song "I'll Be Seeing You." Wistful engineers at the space agency celebrated the rover's remarkable achievements, including the fact that it was originally expected to only operate for around 90 days and wound up working more than 60 times that amount. By virtue of its marathon residency on Mars, the craft collected a staggering amount of data and insights about the Red Planet that forever changed our understanding of that mysterious world.

Beyond a bevy of space exploration records, including the longest distance ever traveled on another world by a manmade craft, Opportunity may best be remembered for, alongside its twin rover Spirit, finding evidence that water once existed on Mars. The proverbial passing of the craft, which was preceded by Spirit's demise in 2010, leaves the still-functioning Curiosity rover as the only operational vehicle currently exploring the surface of the Red Planet. Fortunately, Curiosity will not be alone for too long as NASA plans to send a new, yet-to-be-named rover to Mars in July of 2020 with an expected touch down on the Red Planet in February of 2021.

While mainstream scientists are reflecting on the life and times of the renowned rover, we would be remiss in not mentioning its contribution to the realm of 'space oddities' over the years. Images from the Opportunity rover served as the basis for a number of curious finds made by both anomaly hunters looking for clues of an ancient advanced civilization left behind on the Red Planet as well as mainstream scientists who spotted puzzling elements in photos from the craft. Among those curious objects were a series of mysterious spheres on the surface of Mars, a pair of very unusual rocks, a possible bunker of some kind, and, our personal favorite, a 'handgun.'