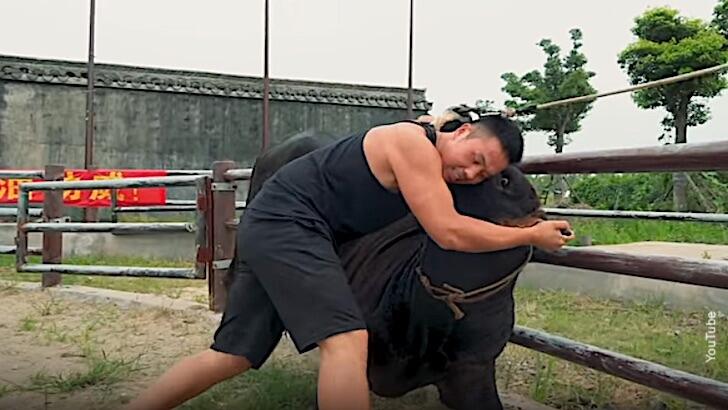 Chinese bullfighting uses techniques of martial arts rather than capes and swords.

Ren Ruzhi says he uses the techniques of Kung Fu to bring 800-pound bulls to the ground in less than three minutes. He and others approach the animals from the front and use the bull’s horns to twist their heads. The contest is over then the bulls are down and involves no weapons or gore, like Spanish bullfighting. Ruzhi claims that they are not hurt in any way, although animal rights activists beg to differ. Videos of the contests show that the animals are apparently no worse for the wear and get back up peacefully.

The practice is ancient, dating back 600 years to the Yuan Dynasty and is a traditional sport of the ethnic minority Hui people. Practitioners use the martial art of qigong and direct the momentum of the bull in order to wrestle it down. This also differs from the ancient art of 'bull leaping,' in which ancient Mediterranean cultures essentially “danced” with the cows by leaping over their backs in athletic competition.

Han Haihua, a trainer, says that the animals can learn to strategize against their opponents: “A bull can also think like a human, they are smart.”