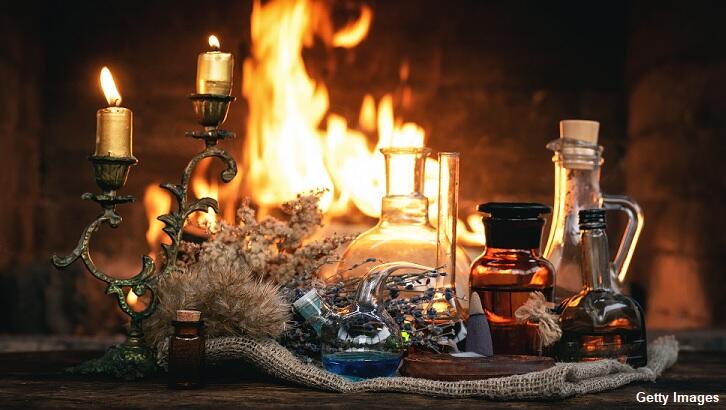 A self-described witch in Massachusetts claims that she is the target of an ongoing campaign of harassment which culminated with a suspected arson attempt over the weekend. According to a local media report, Lucky Cabral is the proprietor of the apothecary shop Sanctum Folkorica, which offers various accoutrements for practicing Wiccans as well as psychic readings for magical-minded people in and around the city of New Bedford. However, she says, the nearly three-year-old business has recently drawn the ire of a resident who apparently believes she is practicing the proverbial dark arts.

Cabral told radio station WBSM that the strangeness began back in early March when a woman appeared outside her shop and splashed holy water onto both the building as well as cart stationed outside of the shop. Initially dismissing the odd event as a "harmless incident," things took a more worrisome turn later in the month when the same individual made "a small campfire of sage in my doorway," presumably in an attempt to 'cleanse' the site. It would appear that this individual has made no secret about her intentions as, Cabral revealed, "she’s been buying sage all over downtown" and, when asked why she needed so much of the material, the woman indicated that "she's trying to get rid of a bad witch."

The one-sided feud came to a head this past weekend when the woman allegedly stole the cart outside of the apothecary shop and moved it to a location further down the street while dousing it again with holy water. Already agitated by the increasing intensity of the situation, Cabral reached her breaking point when the recovered wagon was subsequently set ablaze on Easter Sunday in an action she believes was the work of this same individual and "could have been catastrophic" because there is an elderly person who resides above the shop and "is on oxygen." With that in mind, the beleaguered witch declared that "the gloves are off" and she intended to press the authorities to take action after her previous reports to police had failed to put a stop to the harassment.

Cops in New Bedford subsequently arrested the woman behind the incidents on Monday and charged her with vandalism for the strange sage burning event back in March. Police say that they plan to continue investigating the matter further and may bring additional charges against the woman in the future, possibly pertaining to the burned cart. As for why she became the target of such sustained harassment, Cabral cited rumors that her shop had somehow come into possession of an heirloom which once belonged to the woman's family and said that if that's the case " I’d be glad to give it back to her" to hopefully put an end to the ordeal.