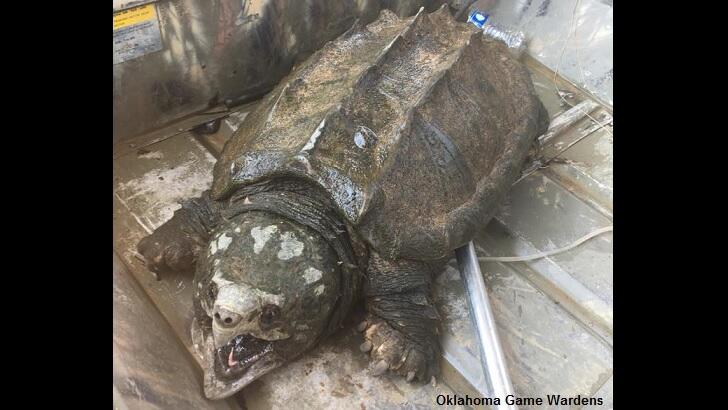 A pair of fishermen in Oklahoma pulled in a monstrous catch in the form of a massive and rather menacing-looking snapping turtle. Jonathan Van Fleet and Anthony Dover were left wondering what to do with the four-foot-long creature after they reeled in their trotline and saw that it had gone after the bait on one of the hooks. Getting it out of the water must have been quite the chore as, according to Oklahoma Game Wardens, the turtle is believed to have weighed somewhere between 80 and 100 pounds.

Amazingly, the men actually managed to safely get the hook out of the snapping turtle's mouth in an act that could have gone from brave to misguided in a matter of moments. As noted by the game wardens, "the bite from a turtle this large can easily remove a finger, or even your hand." Lest one suspect that this is hyperbole, it just so happens that a mysterious finger was found in a snapping turtle in Louisiana this week, making us wonder what could be inside the belly of this beast from Oklahoma.

Fortunately for the animal, we're unlikely to find out as it is illegal to keep a snapping turtle in the state. As such, after wildlife officials arrived to examine the animal and determined that it was in good health, the massive creature was returned to the waters from whence it came. So if you are swimming in Oklahoma's Little River later this summer and you feel something nibbling on your leg, you want to make a hasty exit.