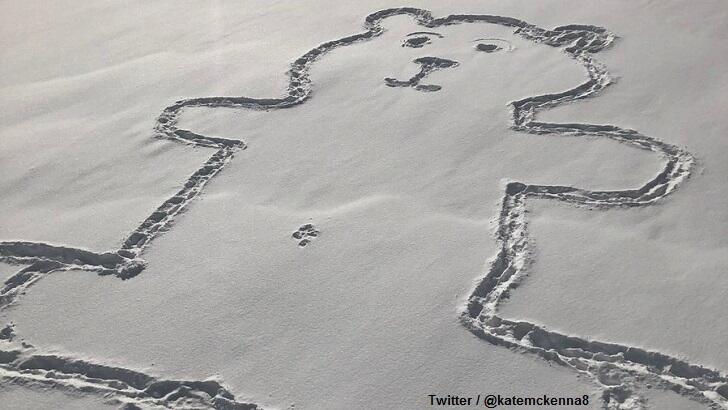 A rather strange mystery has emerged in Montreal and it centers around the belly button of a massive bear drawn in the snow. The curious creation was reportedly first spotted on Wednesday morning atop a frozen-over canal in the city and was presumably made at some point during the night. Appreciation for the adorable design, however, soon gave way to a nagging question that nobody can seem to answer: how did the person or people behind the bear make its belly button?

According to a reporter with the CBC, the odd detail in question is located a whopping 6 feet, at least, from either side of the bear's body. Coupled with the icy conditions of the canal, this seems to preclude the possibility that someone jumped to the center of the creation and then back to the side again, since it stands to reason that such a leap would most likely lead to the person slipping quite a bit upon landing and there is no indication that anything like that occurred. With that explanation appearing to be eliminated, a number of other suggestions have been offered for how the belly button was made.

Chiefly among the alternative theories is that the bear's creator used snowballs or stones to make the belly button, but this has also been largely dismissed due to how precisely placed the four indentations are in the snow. Others have argued that the artist could have used a hockey stick or some kind of pole with an attachment on it to create the puzzling detail in the design. And perhaps the most intriguing idea put forward by observers is that the 'navel' in the snow existed before the drawing was created and, in fact, inspired someone to build the bear around the belly button.

Alas, unless the artist reveals themselves and offers an explanation, we may never know how exactly their work was done. Do you have a theory on this weird mystery? Share it with us at the Coast to Coast AM Facebook page.