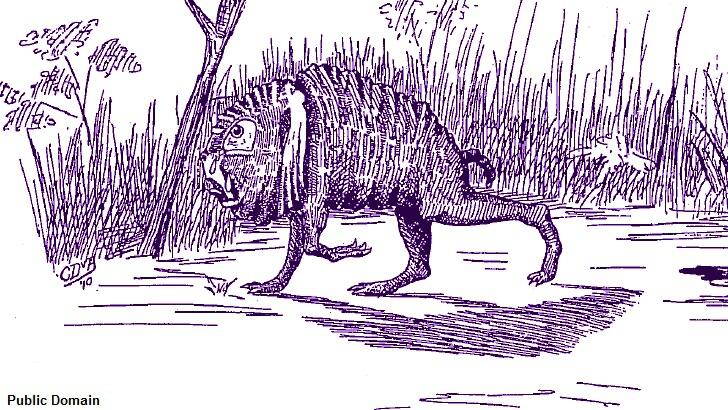 In the annals of mysterious cryptids, there's one creature that stands out among the rest by virtue of its sheer strangeness: the squonk.

The squonk was introduced to the world in the fantastically-titled 1910 book Fearsome Creatures of the Lumberwoods, which purportedly detailed strange animals encountered by pioneering woodsman in America's heretofore unexplored wilderness.

Said to lurk in the forests of northern Pennsylvania, the squonk is described as a repulsive little creature sporting ill-fitting, saggy skin that is covered in various unsettling blemishes.

Apparently both aware and ashamed of its gruesome appearance, legend has it that the squonk spends it days trying to hide from the world in the wilderness while simultaneously weeping over its unfortunate fate.

However, the story of the squonk is not without its fair share of irony in that those very tears are what purportedly protect the creature.

According to author William T. Cox, who wrote the Lumberwoods book, the creature was once captured by a man who encountered it and trapped the cryptid in a sack.

When the triumphant squonk hunter returned home with his prey, he was stunned to discover that there was nothing in the bag except for the creature's tears, suggesting that the cryptid had somehow dissolved.

Of course, skeptics and wildlife experts have largely dismissed Cox's book as a work of fantasy containing fabricated tales of 'fantastic beasts and where to find them.'

Nonetheless, the squonk has endured on the periphery of cryptozoology as somewhat of a 'cult' creature appreciated by those 'in the know,' perhaps most famously referenced in the 1974 Steely Dan song 'Any Major Dude Will Tell You.'

Before the arrival of search engines with the ability to answer every question, the lyric "have you ever seen a squonk's tears? Well, look at mine," left fans of the band scratching their heads and debating what the line was supposed to mean.

So while naysayers may argue that the creature never existed in the first place, if you ever find yourself exploring a northern Pennsylvania forest and notice some inexplicable sobbing, tread lightly for you just may have stumbled upon a squonk.