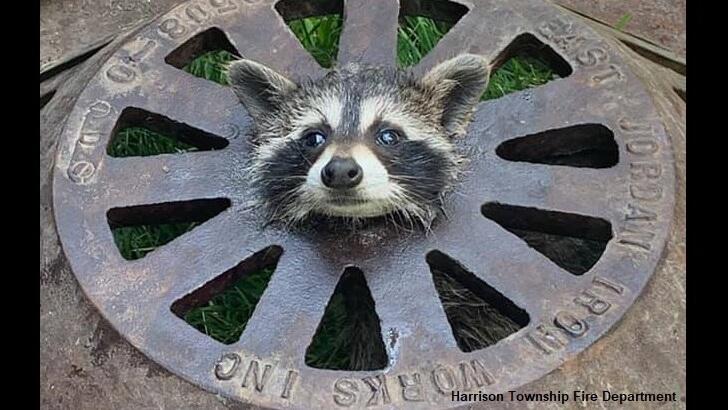 Firefighters in Michigan found themselves faced with a rather unusual challenge this week when they were enlisted to help rescue a raccoon that had somehow gotten its head stuck in a sewer cover. According to a local media report, the odd incident unfolded in the community of Harrison Township on Tuesday afternoon when animal control officers were alerted to the 'trash panda' that had somehow gotten itself into the sticky predicament. In turn, the Harrison Township Fire Department was called to the scene in the hopes that they could figure out how to free the creature.

Marveling that he had never seen such a situation in his nearly two decades as a firefighter, lieutenant Brian Lorkowski explained that firefighters initially attempted to extricate the creature by lathering its neck with soap. When that tactic proved futile, they briefly pondered cutting the cover, but its cast iron composition caused that plan to be dismissed, since such a maneuver would result in the metal getting extremely hot and, in turn, the animal's safety would be jeopardized. Ultimately, they acquired some cooking oil from a nearby homeowner and, combined with a bit of proverbial elbow grease, they were able to free the creature, which fortunately wound being unharmed by the strange misadventure.