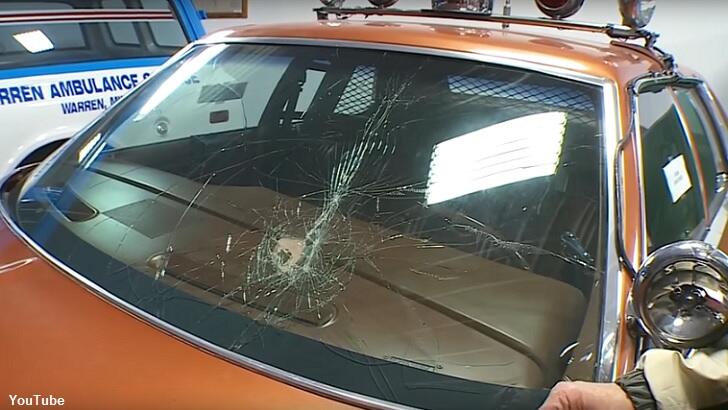 Hundreds of people gathered at a museum in a small Minnesota city on Tuesday evening to commemorate the 40th anniversary of a noteworthy UFO event in which a mysterious glowing ball of light smashed into a deputy's patrol car. The case, which is fairly well-known in UFO circles, occurred on August 27th, 1979 when Marshall County Deputy Val Johnson was out on patrol in the early morning and spotted a puzzling light off in the distance standing out among the darkness in the remote rural region of the state.

Curious as to what the oddity might be, the deputy drove over to investigate and eventually reached the inexplicable light which was about a foot in diameter and hovered a few feet above the road. At that point, the situation took a harrowing turn as, according to Johnson, the anomalous object "went at" the car, smashing into it and engulfing the vehicle in light. The collision caused considerable damage to the windshield and headlight of the patrol car, while also bending two antennas attached to the vehicle.

Perhaps the most fantastic aspect of the case was that the clock in the car and Johnson's watch both stopped for 14 minutes, seemingly as a result of the strange encounter. The deputy also passed out for around a half-hour after the collision and suffered burns to his eyes and face that one doctor likened to "welder's burns." A subsequent examination of the vehicle by the Ford Motor Company left their expert baffled as to what could have caused the damage to the car.

The case garnered considerable publicity at the time and Johnson even wound up appearing on Good Morning America to discuss his experience a few weeks after it happened. And, as one can imagine, the encounter was of particular interest to UFO researchers, due to the deputy's respected position in the community and the very visible damage that was apparently caused by the mysterious craft that struck the vehicle. To this day, the Val Johnson incident is considered one of the touchstone UFO cases of the 1970s.

In an amazing testament to just how seriously Johnson's encounter was regarded at the time, the damage to his car was never repaired and the vehicle was eventually put on display at the Marshall County Historical Society museum in the city of Warren, where is it said to be the site's most popular attraction. It was there that over 300 people from throughout the area celebrated the 40th anniversary of the incident this past Tuesday. According to a local media report, Johnson himself was unfortunately not in attendance as he largely stopped discussing the case a few years after it happened, save for a rare interview a few years ago.

While Johnson may not have been on hand at the festivities, one key witness to the case was at the event: Pete Bauer, who served as the Marshall County dispatcher on the night of the incident. He recalled speaking with the deputy when he radioed in to report the encounter and observed that Johnson seemed to get increasingly uneasy as the realization of what had just happened to him took hold. Based on his experience working with the deputy, Bauer expressed the belief that Johnson was genuine in his account of what occurred and mused "people who would doubt, you can't doubt this."