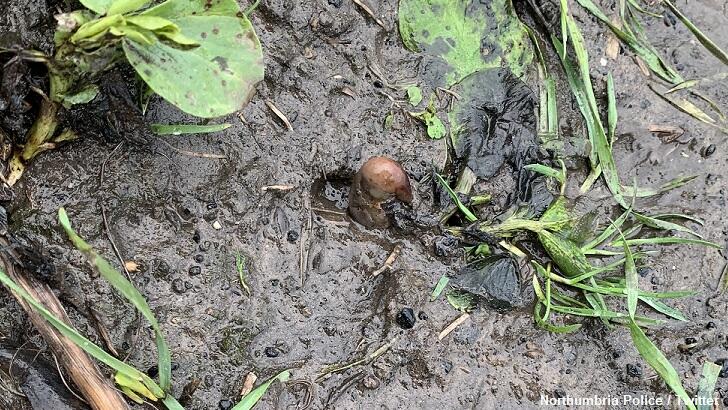 A police department in England got quite the laugh when they received a worrisome report about possible human remains being discovered and, upon searching for the suspected body, found a potato. The amusing incident occurred on Tuesday afternoon when a woman walking her dog in the village of Winlaton noticed what she thought was a human toe sticking out of a muddy patch of dirt. Understandably concerned about what she had possibly stumbled upon, the woman snapped a photo of the potential toe (seen above) and sent it to the Northumbria Police Department.

Recounting the event in a post on Facebook, the department conceded that the oddity in the image "did show what appeared to be a human foot" and, as such, they dispatched a special team, which included search dogs, to go and investigate the matter. "Eventually we tracked down the 'scene,'"’ they explained, "only to discover the toe was in fact a potato with a mushroom growing next to it." Indicating that "the call was made in good faith," the department praised "the vigilance of the woman" who reported the 'toe,' advising other residents who find themselves in a similar situation to do the same. "If it does turn out to be a vegetable," they wrote, "our police dogs will thank you for the treat!"