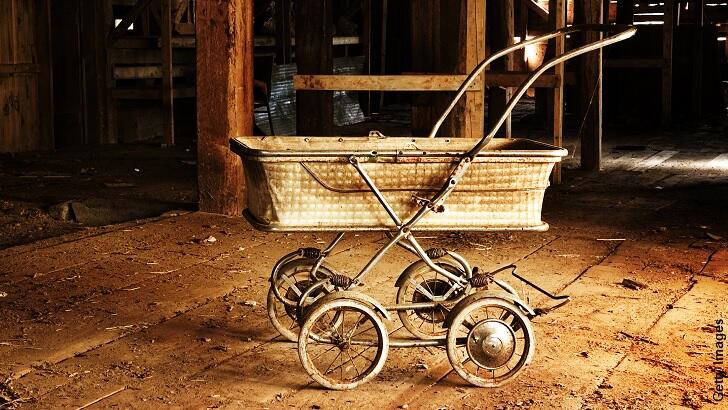 A family in Mississippi claims that their home was been plagued with unsettling paranormal activity ever since they received a vintage baby carriage, which they now think is haunted, for Christmas. According to a local media report, the eerie antique was a gift that Whitney Merritt's daughter had gotten this past holiday season. Shortly after the carriage was brought into their home, however, weird events began to take place, beginning with an inexplicable knocking sound which occurred over the course of a few days and soon turned into a series of booming thuds heard a few nights later.

Thinking that perhaps someone was in their attic, the family investigated the situation and found no one. The following week, the activity escalated when a bag of coffee mugs somehow fell from a table in the middle of the night. After Merritt cleaned up the mess and went back to bed, she heard the sound of silverware being tossed into the sink. Chillingly, when she returned to the kitchen and the sink was as empty as she had left it at the end of the night. "I was freaked out," Merritt recalled, "I stayed up for a while."

The final week that the family were in possession of the baby carriage, a door slammed seemingly on its own, the children's toys would come to life despite being turned off, and an odd incident in which Merritt saw her husband enter their kitchen, but then spotted him fast asleep in their bedroom seconds later. Baffled by her experience, she pleaded please don’t think I’m crazy. Cause repeating this to somebody, I know it sounds weird."

Ultimately, the family took stock of all the strange things that had happened since the holiday season and began to wonder if the baby carriage could be to blame. Their suspicions were seemingly confirmed when they moved the antique to their garage and all of the unsettling activity immediately ceased. A subsequent investigation into the origins of the carriage found that the father who once owned it had died tragically, leaving them convinced that his spirit is attached to the object, which they wound up selling on Facebook with the caveat that they believe the antique is haunted.