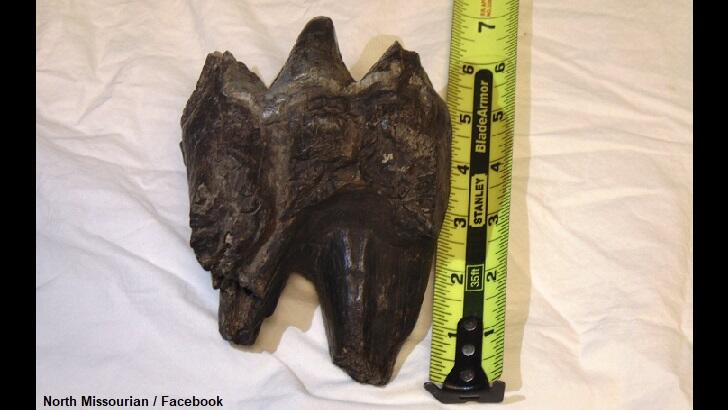 A treasure-hunting teenager in Missouri stumbled upon a fantastic object from the distant past in the form of a fossilized mastodon tooth. According to a local media report, the remarkable find was made by Ira Johnson last month as he was exploring the shore of the Grand River in the community of Jameson. During previous excursions, he has picked up all manner of odd items, including a pocket watch and silver spoons. However, this particular hunt provided the young man with his most fantastic find yet.

As he was walking along the riverbank, Johnson noticed a curious-looking object which he initially suspected was a rock until he got a closer look at it. "I thought 'that ain't no rock,'" he recalled about the discovery, observing that "it was out of the ordinary." Thinking that the unique find was some kind of tooth, perhaps from a cow or a horse, Johnson pocketed the object and continued on his search for treasures.

When he arrived home and showed the object to his father, who collects Native American artifacts, his dad was amazed by the discovery, leading Johnson to conclude that the find was "no ordinary tooth." A subsequent search online by the duo led them to conclude that it was a mastodon tooth and their determination was later confirmed by a pair of professors from the University of Iowa. The tooth itself, which measures approximately two inches wide and six inches long, is believed to be around 12,000 years old.