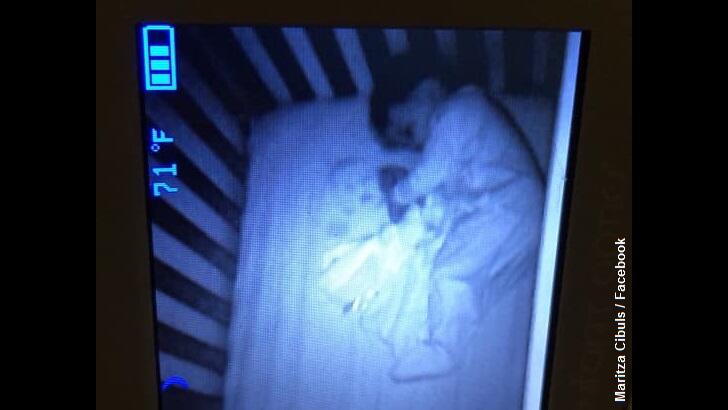 A mother's spooky tale of spotting a 'ghost baby' on her son's bed monitor has gone viral thanks to the rather amusing source for the unsettling 'spirit.' The strange incident reportedly occurred last Thursday evening after Maritza Cibuls of Illinois had put her child to bed and was about to turn in for the night. However, much to her horror, when she glanced at the baby monitor watching over her son, she was aghast to see the eerie face of another baby staring back at her alongside the boy.

Cibuls later shared the account on Facebook, where she posted a photo of the suspected apparition, recalling that "I was so freaked out. I barely slept." The then-nervous mom even went so far as to try and "creep in" to the room to get a better look at the ghost, but presumably stopped short of doing so for fear of disturbing the baby's sleep. Ultimately, Cibuls says that she tried to forget about the unnerving sight, but couldn't stop thinking about what she thought was some kind of spirit in her baby's bed.

Fortunately, her frightening story wound up having a decidedly less-than-horrific ending as she eventually went into her son's room the next morning and discovered the true nature of the 'ghost.' "It turns out my husband just forgot to put the mattress protector on when he changed the sheets," she explained, showing that the uncovered bed sported a sizeable label featuring a photo of a grinning baby's face that, when spied through a monitor, becomes rather ghostly-looking.