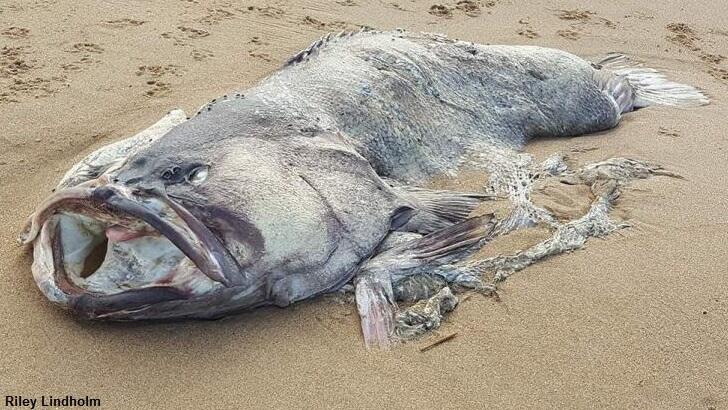 An Australian couple walking along a beach in Queensland were aghast when they stumbled upon the enormous remains of a fish that left them scratching their heads.

The gruesome creature, discovered by John and Riley Lindholm, was estimated by the couple to have weighed around 330 pounds and measured around five feet long.

Despite having a lengthy career as a charter skipper and encountering all manner of odd fish, John was perplexed by this particular find.

"I've seen a lot of fish, and a lot of big fish, but I've never seen anything like it," he marveled to ABC News in Australia.

It would seem that John is not alone as images of the creature posted online left observers baffled and suggesting a wide variety of possible fish.

Eventually, even the Queensland Boating and Fisheries Patrol weighed in with their take, conceding that they couldn't be certain, but speculated that it could have been a species known as a Queensland groper.

The main reason why the nature of the fish remains a mystery may be even more bizarre than the creature itself as the massive carcass actually vanished from the beach by the time the Lindholms returned the next day.

Although it was likely devoured by scavengers of some kind, one can only wonder what kind of nightmarish creature would feast upon such a gruesome find.